What the ADA's Leadership Overhaul Means for T1D Cure Research

The American Diabetes Association ('ADA') is looking for a new CEO; no matter who is chosen, they will face a series of historic decisions. The work of the ADA seems to be losing relevance to the community, as reflected in a -40% revenue drop during a 15 year period where the number of people living with diabetes doubled. The restructured board and new CEO will need to act quickly to restore the luster and relevance of the organization before time runs out.

What does all of this instability mean for the T1D community? Is there anything the new administration can do to make inroads with T1D donors, or will any attempt be viewed as too little too late?

This report will illuminate these questions in a way that we hope can be useful for the new leadership of the ADA. The data is based on an extensive survey of people living with T1D conducted in January 2022. We asked people for their general attitudes towards the ADA, as well as how they perceive the relevance, opportunities, and challenges the organization faces.

The T1D community does not view the ADA as their best option for a T1D cure.

Only 6% of people living with T1D say that the ADA is the best choice for finding a cure for T1D. The other 94% chose different organizations. See Appendix A. In the marketplace of T1D nonprofits, ADA is being trounced by JDRF and other organizations.

T1D financial donors choose to give to other organizations.

Only 8% of the T1D community say that the ADA would be their top choice when making a financial contribution to a diabetes charity. The other 92% choose different organizations to give their money to. See Appendix B.

This may be one of the main reasons why the annual revenue of the ADA has declined dramatically in the past 15 years. People with T1D are a powerful fundraising vehicle for diabetes nonprofits, and losing their support is certain to have an impact. Recovering the trust of the T1D community could yield big dividends for the ADA.

The ADA still maintains a strong brand reputation with the T1D community.

When asked ‘how do you describe your general opinion of the ADA’, only 7% of the T1D community hold a negative opinion. See Appendix C.

The ADA brand remains strong, trusted, and is perceived to be relevant within the T1D community even though most people with T1D do not choose the ADA when making donations to a diabetes charity.

Over time, there is a chance that the T1D community will move farther away from supporting the ADA in a way that permanently erodes its brand equity. However, during this brief window of time, the positive brand perception presents a tremendous opportunity for the ADA to rebuild an enduring relationship with the T1D community by making a new and vigorous commitment to funding T1D cure research.

A dedicated Practical Cure platform would be a win-win for the ADA and the T1D community.

82% of the T1D community would donate to the ADA if the organization made finding a Practical Cure for T1D a top priority.

When asked to imagine that the ADA was to fully commit to building a Practical Cure research program and actively increase the resources it dedicated towards this goal, 8 out of 10 people said they would definitely or probably make a donation. See Appendix D.

Right now, there is a window of opportunity for the ADA to use its positive reputation with the T1D community in a way that will establish a deep and lasting relationship. On one hand, T1D donors do not choose to support the ADA today, and the organization is struggling to find a foothold with people with T1D. On the other hand, T1D donors generally feel a sense of goodwill and trust towards the organization. A majority of T1D donors say they could be won over if the ADA adopted a pursued a Practical Cure research program.

While there are relatively few people with T1D compared to T2D, these people generate half a billion dollars a year in donations largely meant for a single purpose: research to find a cure for T1D. A Practical Cure initiative at the ADA could change the fate of the organization as well as the direction of diabetes research funding.

Appendix A: What diabetes research nonprofit do you perceive to be most focused on finding a T1D cure? 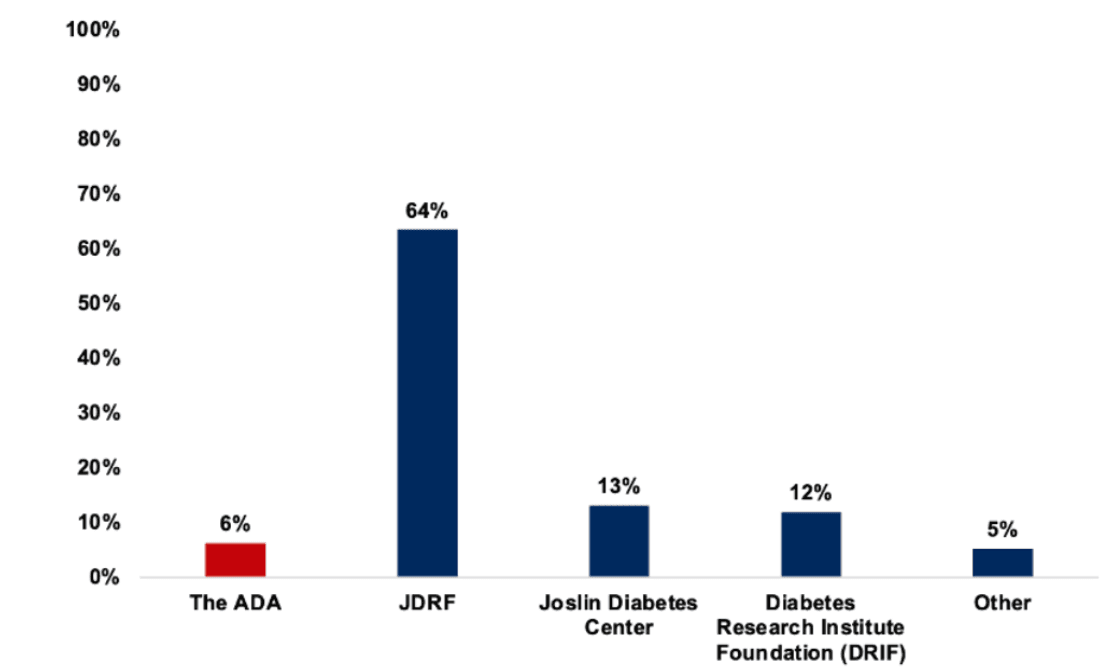 Appendix B: If you had some spare cash that you wanted to donate to a diabetes organization in the next year, would you choose: 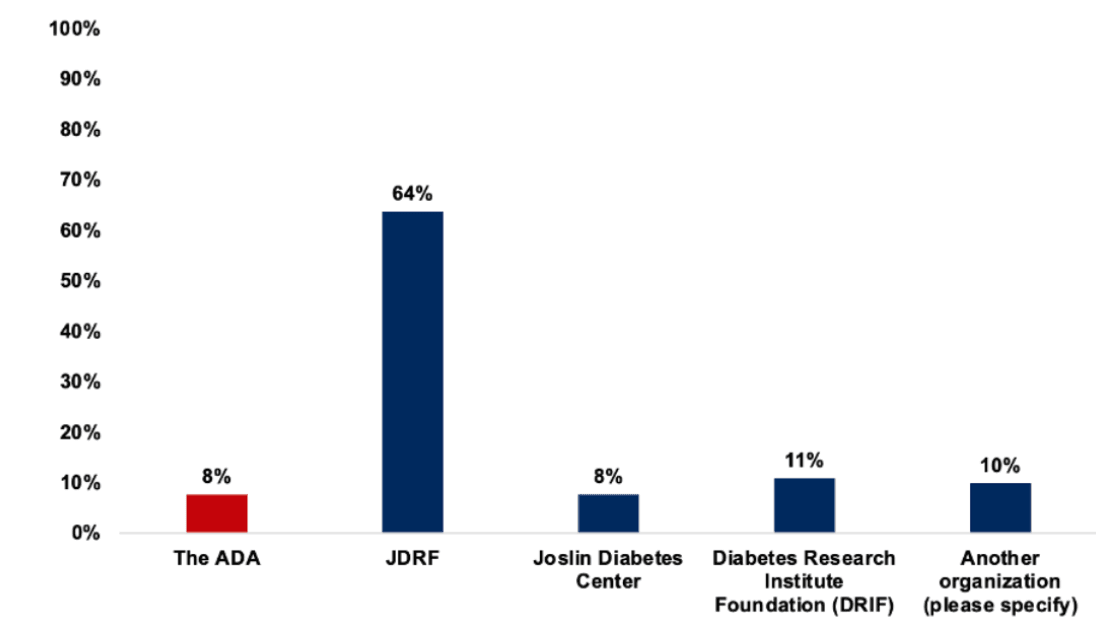 Appendix C: How would you describe your general opinion of the American Diabetes Association? 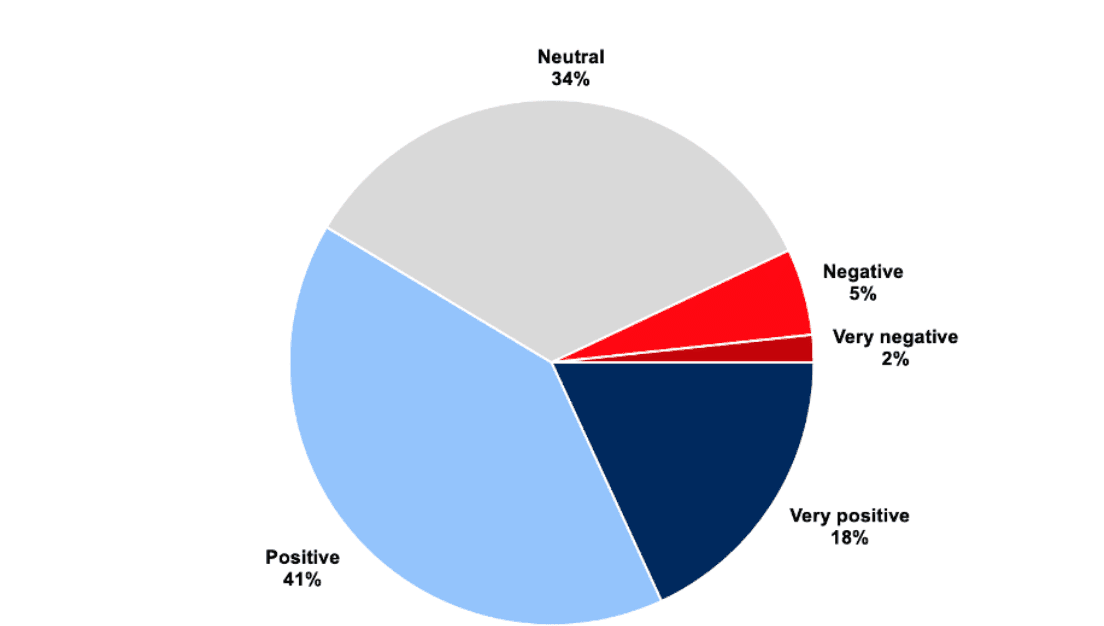 Appendix D: Imagine now the ADA was to fully commit to finding a practical/functional cure for T1D and actively increase the resources it devotes to this objective. How would this change your likelihood of supporting the ADA in the future? 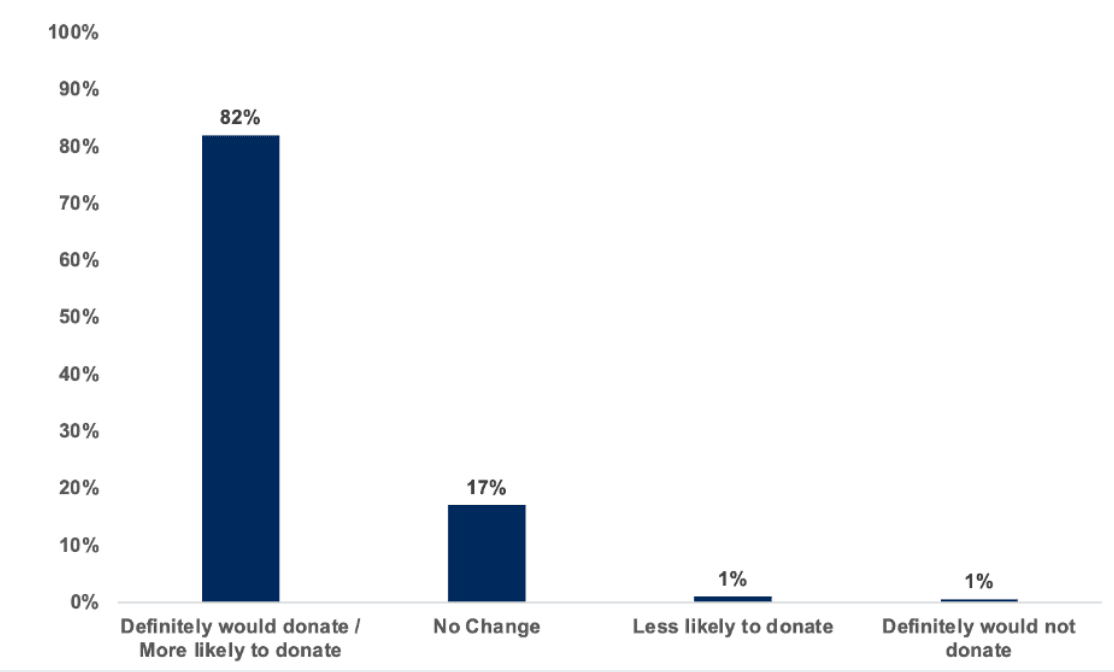