Yesterday JDRF released financial statements from its most recent fiscal year, FY 2021 (which started July 1, 2020 and ended on June 30, 2021). The financial information is extraordinary because it reflects a full year hampered by the COVID-19 pandemic.

The numbers show that JDRF had an extremely difficult but resilient year. During COVID many non-profit and for-profit organizations, uncertain of what the near future would bring, made deep cuts to many expenses including payroll, rent, R&D, advertising, etc. JDRF followed this financial strategy and, as is quickly visible in the expense section of this report below, reduced overall expenses by -40% from 2020 and by half from 2019, the financial period before COVID. Given the extreme events, this reduction in expenses is as expected and represents, in our view, strong financial discipline.

On the other hand, total revenue reached a record high, which is quite surprising given COVID, and a sign of the strength and resilience of JDRF. Traditional in-person fundraising did decline but this was more than offset by a dramatic increase in contribution from the JDRF T1D Fund – adding about +$57 million in revenue this year.

One major takeaway from reviewing the financial data is that research funding dropped to $44 million ($29 of research grants + $15 of T1D Fund investments), the lowest level since we have been covering the numbers in both absolute dollars and in percent of revenue. COVID clearly impacted this expense area and we expect this number to improve markedly in 2022.

JDRF leadership offered this perspective during a discussion with us regarding their financials:

“FY21 was an anomalous year in several ways: impact of COVID; event-based fundraising, our primary funding source for all programmatic spend, was down by 25%; unusual seasonality in our fundraising with a shift in fundraising to our fiscal fourth quarter; and a significant portion of funds raised were earmarked for T1D Fund future investments. With momentum going into FY22, JDRF expects to significantly increase research spend in FY22 and beyond.”

JDCA hopes that JDRF will use this unusual period as an opportunity to re-set and double down on prioritizing research grant funding toward a T1D cure in a way that is reflected in the numbers for many years ahead. 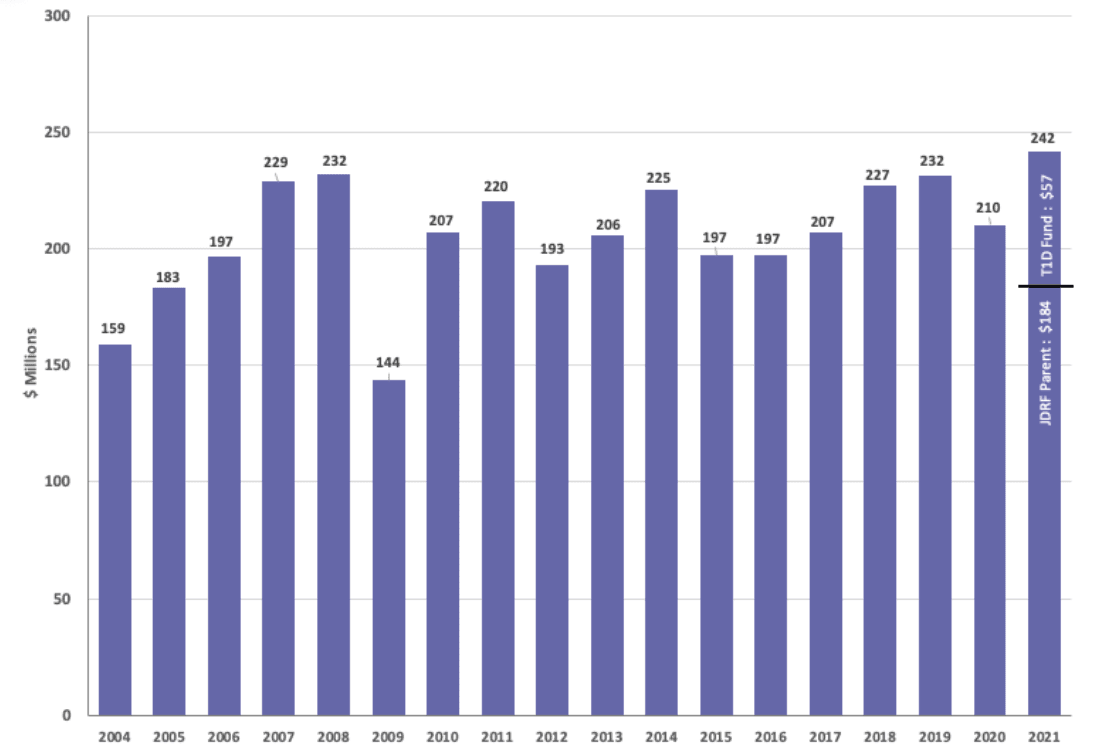 Overall, JDRF revenue was $242 million, the highest it's been in our years tracking the financials. While traditional fundraising was down, the JDRF T1D Fund more than compensated. See Chart B.

Of the total revenue, $57 million was restricted to the T1D Fund ($30 million from donations/capital campaign + $27 million from investment gains). It is important to note that this income is not likely to repeat from year to year – it will only come in years when the Fund is conducting a capital campaign and/or in a year when one of the Fund’s investments is sold for a profit. The money raised by the T1D Fund during 2021 will remain in the Fund, which leaves the amount JDRF raised from donors in FY21 at roughly $184 million.

In our view, traditional fundraising held up better than expected during COVID, demonstrating the strength of the JDRF brand and the effectiveness of its fundraising apparatus. ‘Special Events’, which include Walks, Rides, and Galas, are historically the largest contribution to annual revenue. During FY21, this revenue area decreased by 25%, from $110 to $82 million. Direct donations, not including the T1D Fund capital campaign, decreased by 19%, from $78 to $63.

As expected, JDRF reduced expenses in FY21 to deal with the uncertainty of COVID. Total expenses were nearly cut in half compared to FY19, the last year pre-COVID; dropping from $212 million to $115 million in FY21. Expenses were cut across the board, impacting all program activities, payroll, rent, meetings, etc. However, no major expense area was hit as hard as research grant funding. See Chart C.

We will cover expenses in greater detail in a later report.

A spokesperson for JDRF explained that the massive drop in grant funding in FY21 was partially due to the fact that many multi-year grants were paused by COVID, and the organization was reluctant to enter new multi-year grant agreements during the uncertainty of the pandemic. JDRF told us that we will see a “dramatic increase” in research grant funding reflected in FY22, which is set to end on June 30 of this year.

*NOTE: In its annual report, JDRF states it funded "$57.3 million for JDRF Research Funding and Investments includes grants, support, advocacy, and new T1D Fund Investments." The $44 Million number used in this analysis, which is also reported in their financial statements, reflects only the actual amount amount of money given to research grants ($29 million) plus the amount invested by the T1D Fund ($15 million). 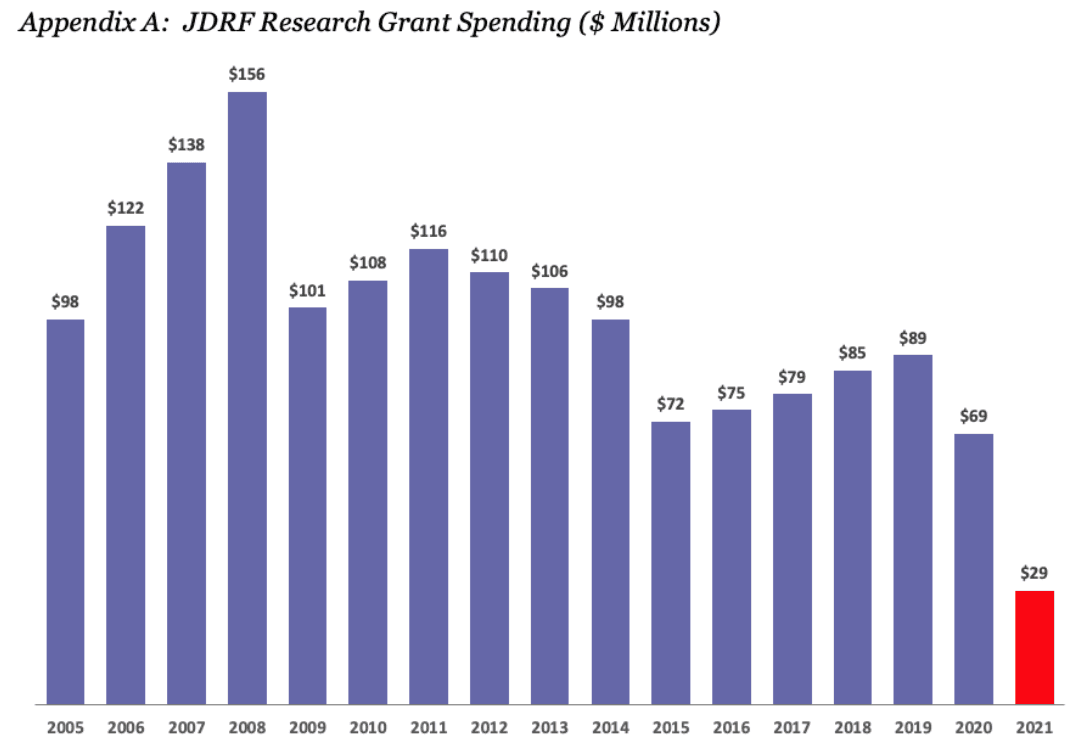 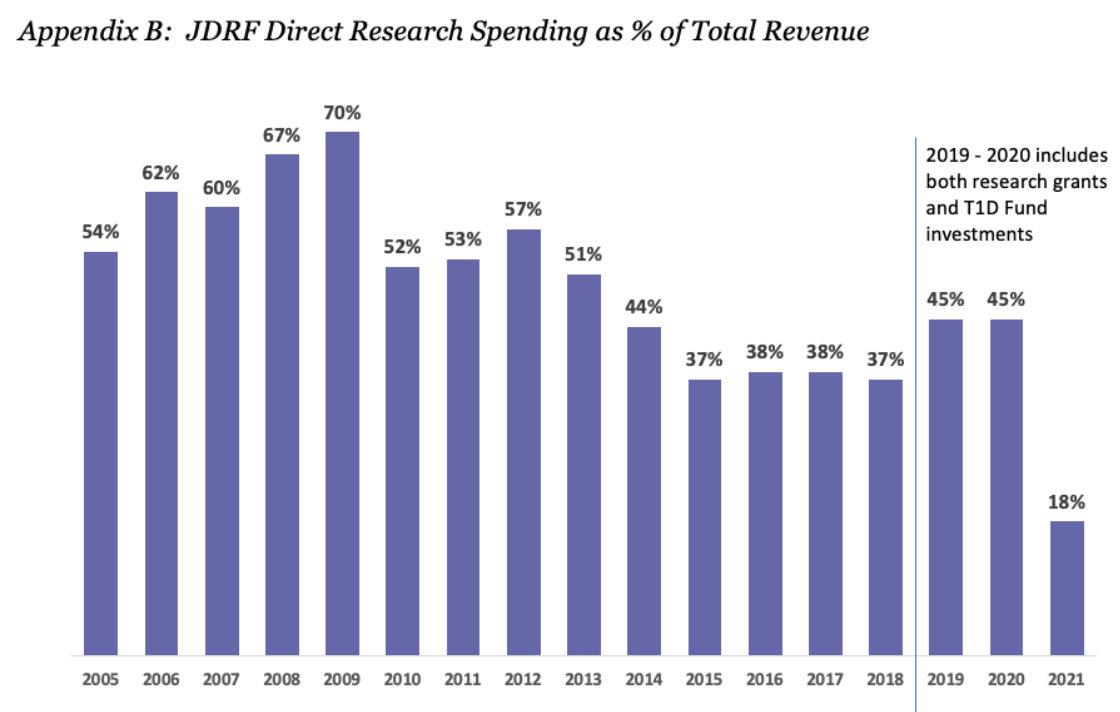