How Does JDRF Use Its Research Grant Budget?

This is the 11th annual report analyzing the research grant funding by the Juvenile Diabetes Research Foundation (JDRF). JDRF is a powerhouse in the type 1 diabetes (T1D) landscape, providing tens of millions of dollars annually for vital research grants. JDRF is one of the largest funders of T1D research in the world. No other nonprofit organization (NPO) is in a better position to fund Practical Cure research for T1D than JDRF.

FY2021 was a highly unusual year for NPOs who were faced with the many challenges presented by COVID-19. Social distancing eliminated most in-person fundraising events. Many research centers shifted their focus to COVID, reducing their efforts elsewhere. Without a clear sense of when COVID would end, these organizations faced much uncertainty about the future.

As such, many NPOs prudently chose to be particularly careful with the allocation of funds during this time, including JDRF who cut their annual spending to the lowest level in the past 20 years ($115 million). At the same time, JDRF revenue surpassed expectations, reaching $184 million. (Note that the T1D Fund contributed an additional $57 million which is restricted for use by the Fund and not included in this analysis.) The disparity between strong revenue and record-low spending allowed JDRF to build up a historically large cash war chest ($124 million) which can be deployed in future years, hopefully for accelerating cure research.

Research grant spending followed the overall budget austerity, dropping from $89 million in 2019 to $29 million in 2021. This dramatic decrease led to declines in funding across many major areas of T1D research.

This report will place emphasis on historical trends based on percentage of total research funding in each category of research. In doing so we will highlight what JDRF and its leaders viewed as most important during a year of very tough choices. This can be likened to a family going through a period of unexpected financial loss having to determine which budget items can be cut (vacations, expensive gifts, etc.) and which need to remain intact regardless of the budget (food, shelter, healthcare, etc.).

The analysis shows what research was funded in 2021, organized by category, amount, and recipient. The largest grants serve as a proxy for which areas of research were considered the most important (see Appendix A).

Research Grant Spending Trends:  Which are the priorities?

The largest grant category in 2021 is cure (or in vivo) research, accounting for $10 million, or 1/3 of the overall research budget (see Appendix B). This was the largest amount given to any of the eight research categories and kept the total dollar amount for cure research on par with the previous six to eight years (see Appendix C). This is good news and we hope to see this percentage hold for many years ahead.

That said, one important point is the fact that none of the money in that category was given to fund Practical Cure research studies as defined by the JDCA.

The second largest amount, $6 million (22% of the research budget) went to fund psychosocial research (see Appendix B). This is a huge increase from the prior year where psychosocial spending was only $300K (see Appendix C). Two of the top five funded grants (in dollars) were in this category, including the largest single grant, titled: Redesigning Care, Protecting the Vulnerable: Building a Global Partnership to Achieve Universal Access for T1D and Other Severe Chronic Noncommunicable Diseases for the World’s Poorest Billion People by 2030. During 2021, for the first time since we’ve been following the organization, JDRF leadership elevated providing funding for the world’s poorest populations as a top priority in a grant that includes not just T1D but research for numerous chronic, noncommunicable diseases as well (see Appendix D).

An Opportunity to Invest Heavily in Cure Research

The financial pressures that COVID placed on NPOs during FY2021 shines a light on which research funding areas are the current top priority and opens up a unique and pivotal opportunity. JDRF's prudent moves to minimize spending in a time of uncertainty meant that significantly less money was available for research grants. As a result, only the highest priority projects as defined by the organization's leadership were awarded research grants. Psychosocial research was boosted tremendously and cure (in vivo) research held steady in dollars although no practical cure projects were funded.

At the same time, revenue surpassed expectations, resulting in a huge, $124 Million cash build up, the largest since JDCA has been tracking T1D non-profits. What will JDRF do with this money in the years ahead? This is an exciting pivotal juncture. JDRF leadership has a once-in-generation opportunity to review, rethink, and reset their research agenda.

In FY2021, JDRF essentially disentangled themselves from the majority of their prior research grant commitments. Combined with a big war-chest, we truly have a unique opportunity to prioritize and substantially increase investment into cure studies, and to commit a special set of funding for Practical Cure research. Maintaining the current percentage of cure research at 1/3 of the portfolio in the years ahead is a solid starting place. Committing to funding and focusing on Practical Cure research would be a game changer. If not now, when?

Note: To conduct this report, the JDCA utilized FY2021 grant funding reports provided by JDRF. Individual grants were placed into broader research categories based on JDCA definitions (see Appendix A). 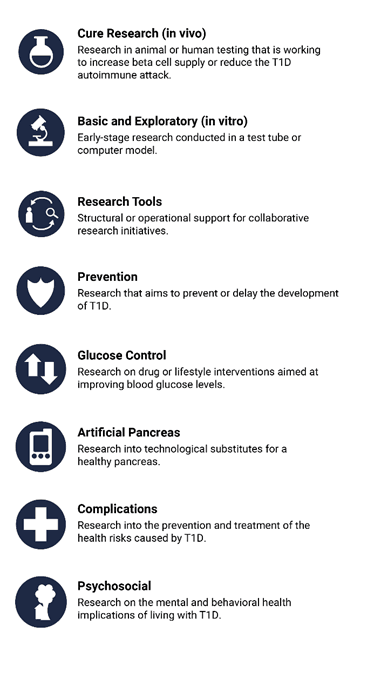 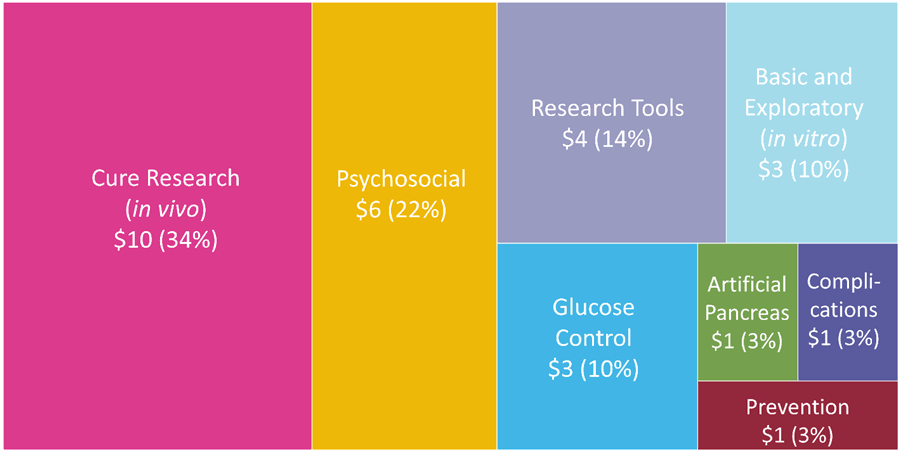