JDRF 2021: How Money was Earned and Used

JDRF’s 2021 Fiscal Year endured the full force of COVID-19, stretching from July 2020 to June 2021. During this period, many organizations saw a contraction in revenue and, in response, reduced expenses substantially.

JDRF cut expenses but, at the same time, surprisingly, experienced near record-high income. Expenses were reduced by nearly half compared to 2019, the year before COVID, following the conservative and prudent financial approach of most organizations at the time. Income, on the other hand, soared to $242 million, the highest reported level since 2001. This report will explain how expenses were used; what drove the record income; and point out potential long-term implications for both.

The disparity between income and expenses led to a record build-up of cash and short-term investment reserves. At the end of 2021, the JDRF had a $124 million build-up of cash and short-term (“operating”) investments (See Appendix). This money is obligated to be used to further the mission of JDRF and its deployment presents both an opportunity and a challenge in the years ahead. As a “war chest,” it can be used to turbo-boost promising research, preferably research that accelerates a functional cure for T1D.

This moment of crisis presents JDRF with an opportunity to deepen its commitment to the areas which are most important to T1D donors. With the expense base cut to its lowest level in 20 years and with a cash war chest as large as ever, the JDRF is in a unique position to re-assess priorities and re-allocate resources. In our view, it is a great time to double down on cure research.

Total organization revenue, which combines both JDRF and the JDRF T1D Fund, reached $242 million in 2021, the highest level since 2001. However, much of this record-setting income was driven by gains from the T1D Fund, the venture philanthropy organization connected to JDRF, whose revenue will be sporadic and restricted to the Fund.

The JDRF T1D Fund is a subsidiary of JDRF International, but has its own board of directors and could be considered separately from the parent organization. The fact that the financial statements are combined with only some information clearly delineated adds some complexity to this review. Because JDRF chose to share revenue data from the T1D Fund in FY 2021 – but not FY 2020 or 2019 – we cannot compare the revenue of JDRF International minus the T1D Fund. 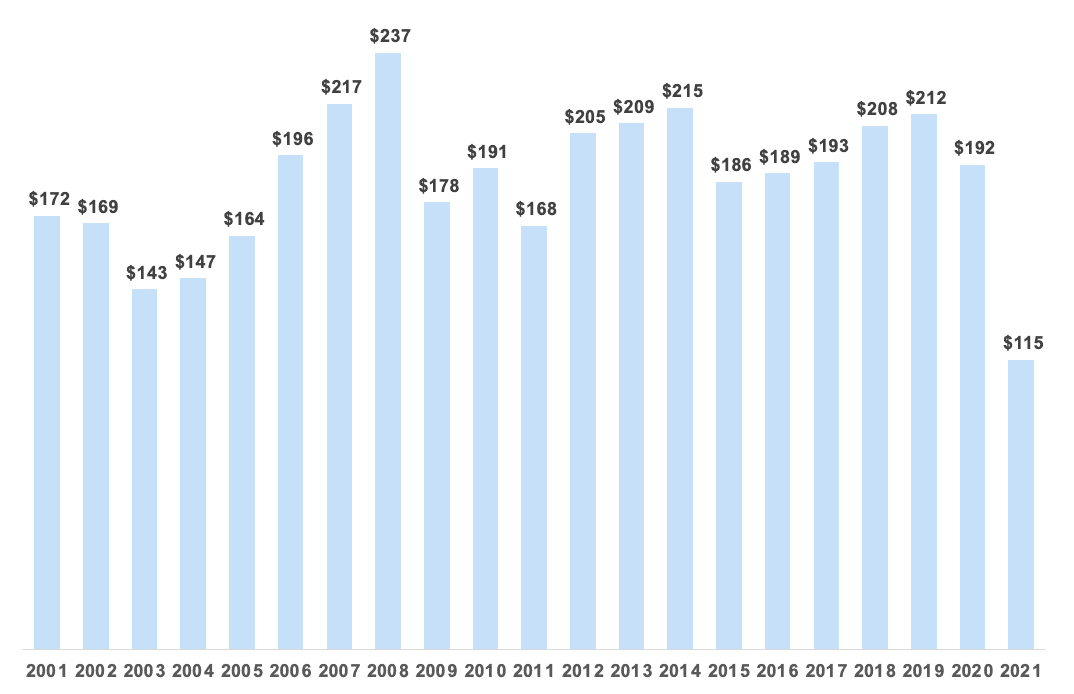 During 2021, because of COVID-19, JDRF cut spending by nearly half from 2019. See Chart 2. Many other organizations concerned about the general state of the economy also made deep cuts during 2021; JDRF was not an exception. While extremely challenging, this move showed financial discipline and helped ensure that the organization was not overwhelmed by the crisis.

We view the spending trends during this year as an exception and fully expect that the decreases in support of key T1D mission areas during this period will be restored in the years ahead. Of the major expense areas shown in Chart 3, all decreased significantly from the prior year except for fundraising costs. 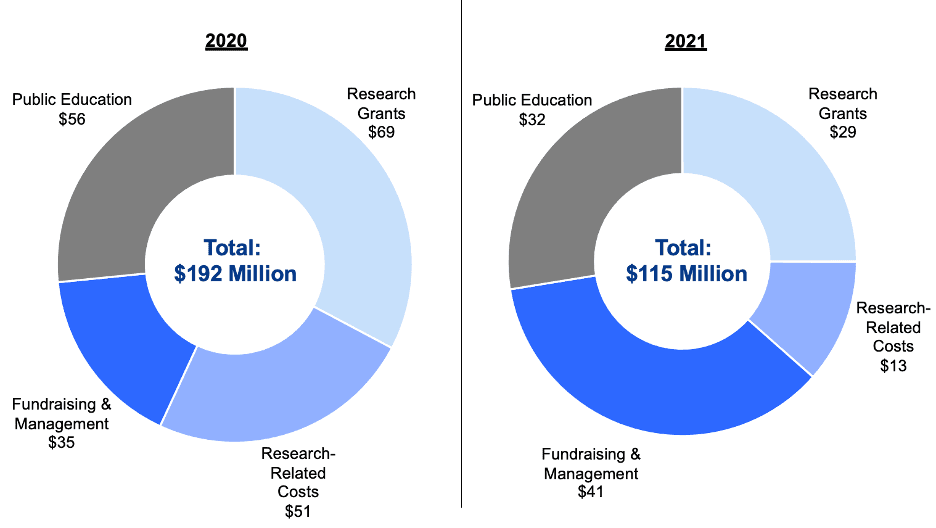 Research grants were significantly reduced from $69 million to $29 million between FY 2020 and 2021. This is the lowest level of research grant spending in 20 years (See Chart 4).  A spokesperson for JDRF explained that the massive drop in grant funding in FY21 was partially because many multi-year grants were paused by COVID, and the organization was reluctant to enter new multi-year grant agreements during the uncertainty of the pandemic. JDRF further stated that we will see a “dramatic increase” in research grant funding reflected in FY22, which ended on June 30 of this year. 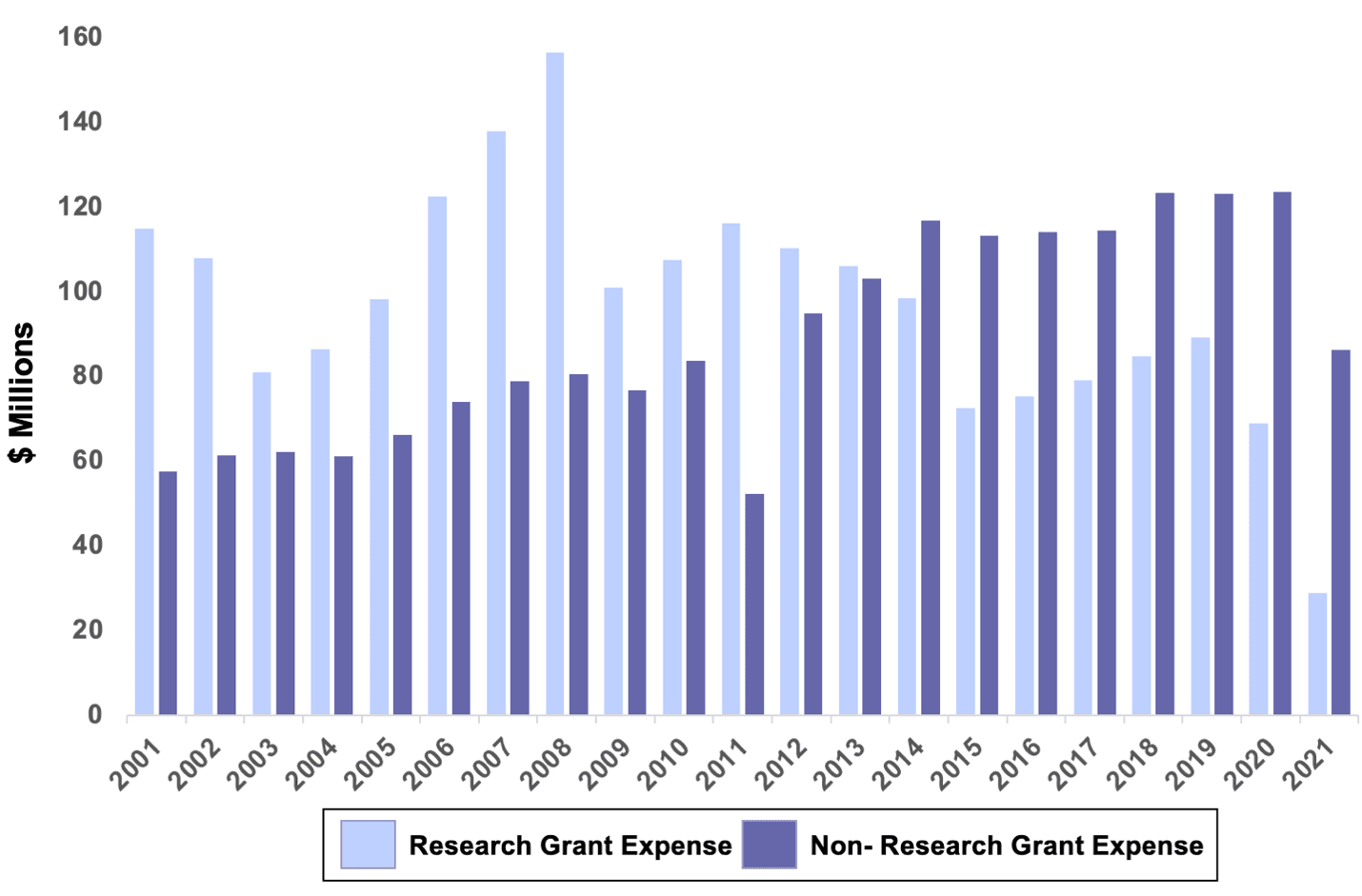 Another look at JDRF functional expenses, shown in Chart 5, clearly show the impact of COVID. All expense categories, except for occupancy (office rent), decreased significantly from 2019. Here are a few of the highlights of 2021 versus 2019: