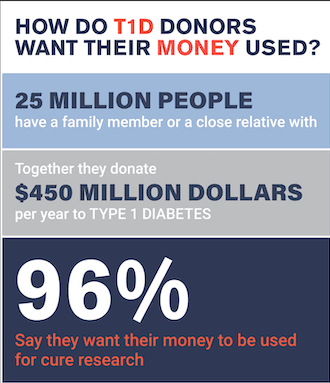 The JDCA conducted its eighth annual survey of T1D financial donor goals and priorities in March 2020. Respondents came from all parts of the United States and ranged in age from 18 to 75, statistically representing the broad array of voices within the T1D donor community.

1. The majority of people overwhelmingly agree that cure research should be the top priority for diabetes charities.

For the past five years, nine out of ten T1D donors have said that cure research should be the top priority for diabetes charities. This finding was consistent in 2020: programs related to lobbying, public education, and growing and maintaining the charity itself are all secondary to the goal of funding research to find a cure for T1D. 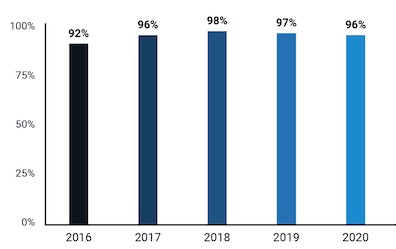 Percentage of T1D donors who answered “yes” to the question,“Do you believe cure research should be the top priority for diabetes charities?”

2. When people give to JDRF, they expect that their money is used to support research.

Eight out of ten people who give to JDRF expect that at least 3/4 or more of their donation is used to fund research projects. This expectation has not changed over the eight years that this survey has been fielded. Yet, the actual amount used to fund research grants has dropped to 1/3 of total revenue in that time – the exact opposite of what donors want. 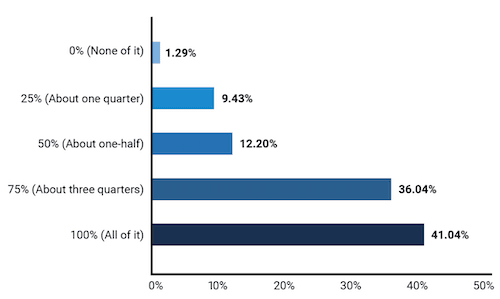 When you give a donation to JDRF, what percent of that donation do you expect is used to fund T1D research?

3. When people find out JDRF spends only 38% of revenue on research, they are likely to stop donating.

The worst possible outcome from a misalignment between how organizations use the money they raise and how donors expect their money will be used is a decrease in donations. The information here should motivate the boards of directors at major diabetes charities to ensure that money is spent in line with their donors’ expectations. 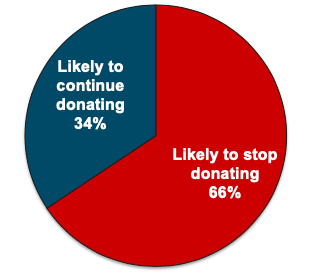 In 2019, JDRF spent only 38% of its money on T1D research grants. Does this change the likelihood of you donating to JDRF in the future?

4. Though donors agree that cure research ought to be the top priority at diabetes charities, most JDRF donors don’t think payroll increases over the last decade have brought them closer to that goal.

Since 2008, JDRF has decreased its research grant expenditure by $67 million while increasing the money it spends on payroll by $30 million. This strategy shift has not made the donors who fund the organization feel any closer to their goal of delivering a cure for T1D. Furthermore, 67% of donors “overwhelmingly disagree” with this reallocation of funds.

Do you believe increases in payroll costs at JDRF have helped deliver substantial progress towards a T1D cure?

5. The majority of people would donate to a Practical Cure if that option were made easily available, as shown by 5-year trend data.

The concept of a Practical Cure is extremely appealing to T1D donors. Nearly everyone polled over the past five years says they would welcome an opportunity to donate to a Practical Cure if that option were available.  The organization that adopts this as a key initiative will find it to be a persuasive and powerful fundraising platform. 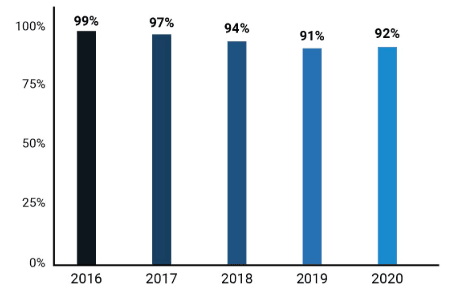 Percentage of T1D donors who answered “yes” to the question,“Would you donate to a Practical Cure if that option was made easily available to you?”