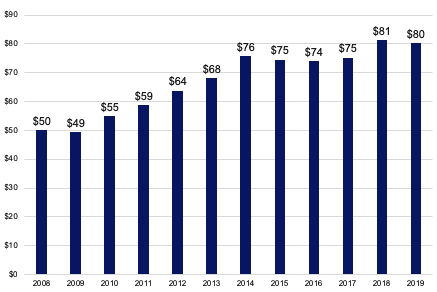 This report is part of series that reviews elements of JDRF’s annual budget. This one looks at trends in JDRF payroll – salaries, benefits, and bonuses. Over the course of the past 10 years no single expense category has increased, in total dollars, as much as payroll. 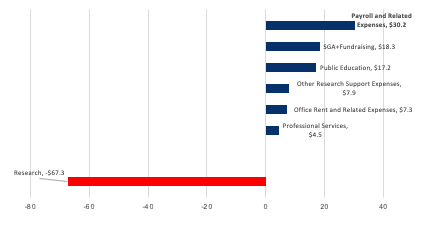 JDRF’s payroll jumped from $50 million in 2008 to $80 million in 2019, a gain of 60%. Substantial payroll increases like this one can happen for only a few reasons: more people are hired, compensation per person rises, and/or the organization adds executive staff faster than regular staff.

What is driving JDRF’s payroll increase?

From 2008 to 2019, JDRF research grant spending was nearly cut in half, despite the fact that JDRF raised the same amount of money in both years. Over the same period, payroll nearly doubled. This means that $40 million moved from funding research grants, the main mission of the JDRF, to paying for increases in salaries, benefits, and bonuses.

JDRF Research Grant Spending vs. Payroll Expense since 2006 (in millions) 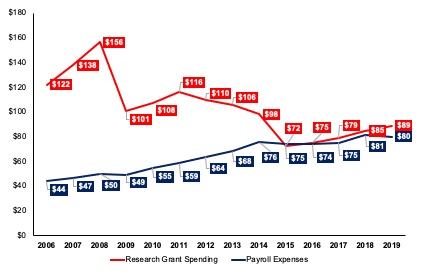 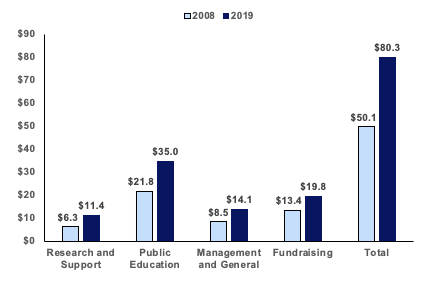 A survey conducted in February 2020 showed that T1D donors do not feel that increases in payroll costs have helped JDRF deliver substantial progress toward a T1D Cure. Nine out of ten people said that the payroll increases are not justified. Furthermore, the survey found that donors “overwhelmingly disagree” with this reallocation of funds and feel that it has not brought them any closer to their goal of a cure for T1D.

Increases in payroll can be a good thing if they result in extraordinary performance. However, today there are only eight Practical Cure projects in human trials and support for research grants at JDRF has been cut by $67 million since 2008. If payroll had simply increased at the rate of inflation since that year, the result would have been an additional $165 Million for research grants.