Encapsulation: An Overview of Competitors

Definition
Encapsulation is defined as the transplantation of insulin-producing cells protected by and contained within a protective device/capsule. An ideal encapsulation device protects the cells from the T1D autoimmune attack while also providing a suitable environment in which the cells can survive and function.

As noted in the introduction, there are three main encapsulation development obstacles.(1) Cell Supply. To date, the only proven source of cell supply is islet cells taken from cadavers, which have very limited availability. Research into deriving a sustainable cell supply from human stem cells has seen promising advances over the past decade and is currently being tested in humans. (2) Cell Health and Survival. Both islet and stem cells need oxygen to survive. This means that a successful encapsulation device must support vein and tissue growth, which allows oxygen to be carried into the device and to the cells. (3) Protection from the Body’s Immune Response. Fibrosis (scarring around the device) is caused when the body's immune system recognizes a foreign object (the encapsulation device) in the body and attacks it. It remains the most common reason encapsulation devices fail. Essential to a successful encapsulation approach is the identification of a biomaterial which is accepted by the immune system and capable of supporting vein and tissue growth so the encapsulated insulin-producing cells are able to release insulin into the blood.

History and Evolution
The earliest macroencapsulation approaches date back to 1950 and the first application of microencapsulation was tested in the 1980s. Both approaches have continued to be researched and tested but all prototypes have failed to date due to one of the three development obstacles noted above.

The most notable encapsulation milestone was in 1994 when researchers documented the first case of insulin independence in a type 1 diabetic patient after encapsulated islet transplantation; however, immunosuppression was required after the transplantation. This development was notable because it showed that cells could be kept alive within an encapsulation device for a sustainable period of time.

Since then, research has progressed in two notable ways: (1) device material and design have increasingly focused on biocompatible materials with a focus on immune system acceptance and (2) encapsulation development organizations are researching and developing human stem cells or islets taken from animals in order to combat the limited availability of human islets.

Today, as noted in the introduction, only four companies developing encapsulation are testing in human trials, while the rest are still testing in preclinical models. LCT's trial is completed but has not published full results and ViaCyte's trial is currently paused due to “variability in the engraftment process.” The Sernova and Beta-02 trials are active and ongoing.

Path to a Practical Cure:
A successful encapsulation therapy would be considered a Practical Cure; however, almost 70 years of research has yet to deliver success. Preventing an autoimmune attack has proven to be an incredibly difficult challenge, and most companies are still running into the same issue of fibrosis and achieving long-term cell survival. Although progress has been slow, there are multiple companies and researchers who seem committed to overcoming these challenges in encapsulation. 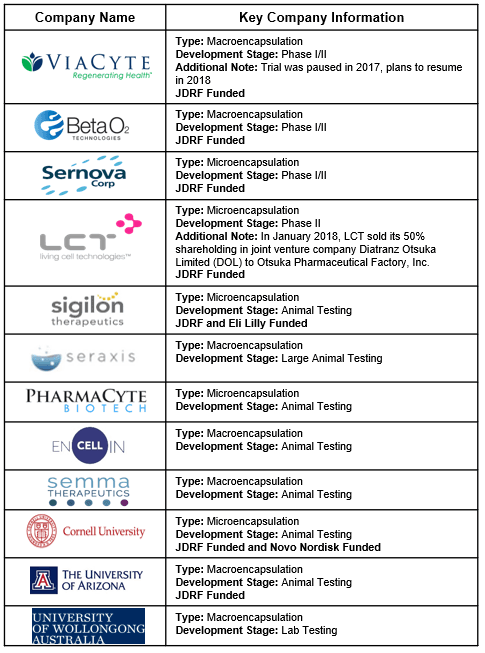