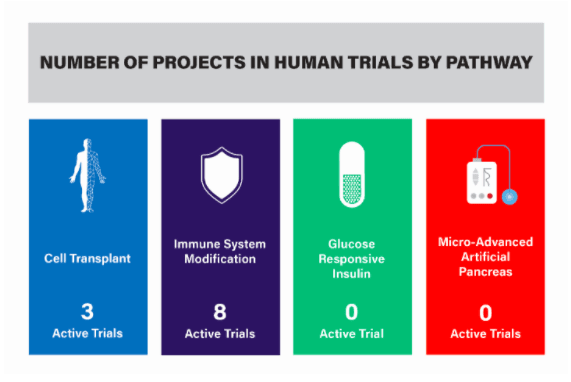 This report reviews the 11 active Practical Cure (PC) research projects underway in United States FDA approved human clinical trials. A summary of these projects is presented in the charts below by pathway and includes the project title, description, location, and status. A full definition of a Practical Cure, as well as the four research pathways, can be found in last week's JDCA report, The Four Research Pathways to a Practical Cure for Type 1 Diabetes (Click here to view).

Three of the eleven Practical Cure research projects are new to the list while three projects from 2017 have been abandoned.

Beyond the 11 active projects, there is also an appendix at the end of the report which outlines high-profile emerging Practical Cure projects. These projects are 'emerging' because they are not currently testing in human trials but are moving quickly in that direction. Our coverage of emerging projects is limited to well known, high profile projects and is not meant to be fully comprehensive.

Projects by pathways are listed below. 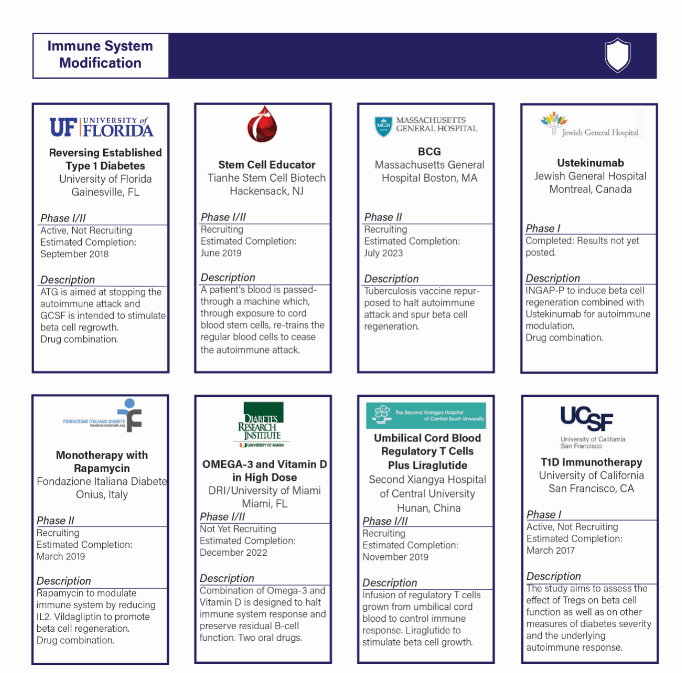 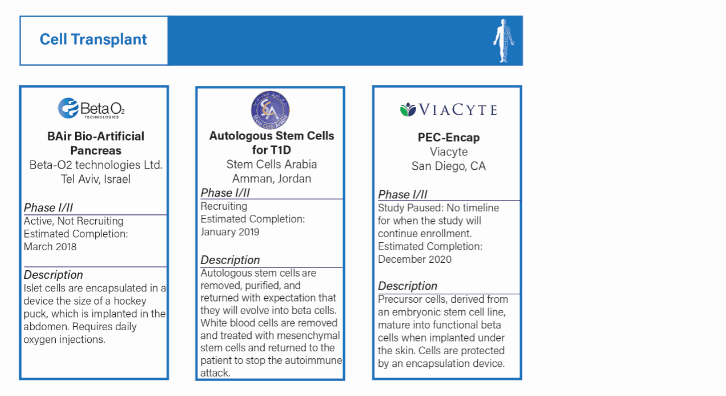 Glucose-Responsive Insulin: Insulin which chemically activates in response to changes in blood sugar.

Micro-Advanced Artificial Pancreas: A device that mimics the pancreas by monitoring changes in blood sugar and independently administers insulin without the patient’s input.  To be considered a Practical Cure the device must be small enough for users to completely forget about its presence. No current devices are small enough to meet this requirement.

Smart Insulin has seen advances over the past few years and a number of approaches are being pursued, including smart insulin patches, intranasal insulin, as well as the traditional pill form.

Merck's smart insulin human trial, the only smart insulin trial which had been approved for testing, has been abandoned because it has been concluded without results for more than three years.

No artificial pancreas projects in, or nearing, human trials are small enough to be considered a Practical Cure. However, technology can evolve quickly and we remain optimistic about future progress.

Emerging PC projects include research which may begin human trials in the next two years. The projects listed below have received a significant amount of media coverage and represent the next-in-line PC projects. However, because none of these projects are currently testing in humans, they are likely more than 15 years away from FDA approval.

This list is not comprehensive and the JDCA welcomes further submissions. If you would like to submit another trial for consideration please email info@thejdca.org.