This is the third in a series of reports on the top five largest T1D research centers in the U.S. It features a profile of the University of California, San Francisco (UCSF) Diabetes Center. In addition to an overview of the organization itself, these reports also examine the current research and research spending at the University.

The Diabetes Center at UCSF is a comprehensive research center and clinic with resources for patient care, diabetes education, and clinical research. It was established as part of UCSF Health in 2000 and is one of sixteen federally recognized Diabetes Research Centers (DRC) in the country, selected for its ability to facilitate progress in research with the goal of developing new methods to treat, prevent, and cure diabetes. Mathias Hebrok was appointed as the Director of the Diabetes Center in 2010.

In 2015, The Sean N. Parker Autoimmune Research Laboratory was established with the Diabetes Center at UCSF through a $10 million-dollar donation, as mentioned above. The centers stated goal is to investigate the underlying causes of autoimmunity. Its main focus is type 1 diabetes, but it also conducts research on other autoimmune diseases like rheumatoid arthritis and multiple sclerosis. Dr. Jeffrey Bluestone, the past Director of the UCSF diabetes center and an expert in immunology, was appointed as the head of the Parker Laboratory.

The Diabetes Center at UCSF has an ambitious and broad-ranging research strategy. Research within the diabetes center is investigating a wide range of topics related to T1D including, but not limited to, cell/stem cell research, immunology research, and islet cell transplantation research. Full details on each grant are listed below in Appendix A (NIH) and Appendix B (JDRF).

UCSF is currently overseeing eight clinical trials and is an active test site for an additional twelve trials. Of the eight trials, three are focused on screening and prevention, three on early-onset research, one is a glucose control trial, and one is a cure-related trial testing islet cell transplantation. More information is available on each trial at the UCSF website(click here to view).

In addition, UCSF is an active test site for two PC projects: 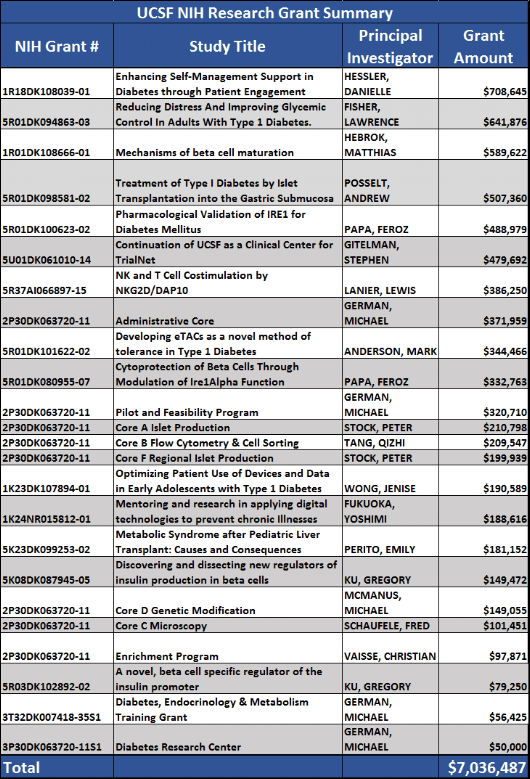 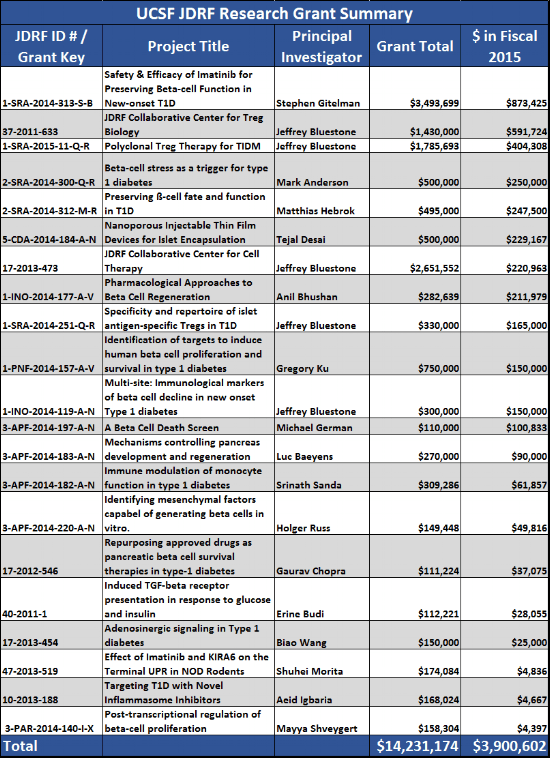