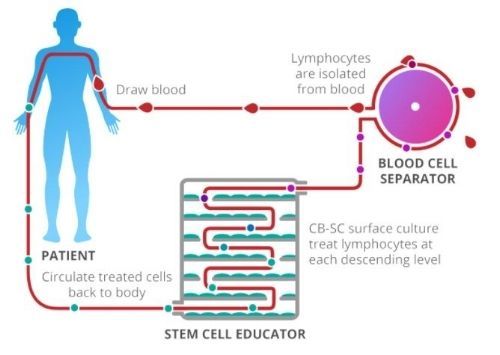 This report provides an update on the Stem Cell Educator ("STE") project at Hackensack Medical Center and features an interview with the Principal Investigator Dr. Yong Zhao. It is one of eleven Practical Cure projects currently in human trials, as noted in the recent JDCA report titled: 'Practical Cure Projects in FDA Human Trials by Pathway'  (Click here to view).   Zhao founded a for-profit company, Tianhe Stem Cell Biotechnologies, Inc., to complete testing and, hopefully, bring STE to market.

Research participants undergo a three-part treatment as illustrated in the picture above. First, blood is drawn from the patient and the lymphocytes are isolated and separated out. Then, over several hours, the cells are passed through the Stem Cell Educator, a medical instrument consisting of multiple levels of petri-dishes, as scene in the picture below, containing umbilical-cord stem cells. Zhao's theory is that the stem cells are able to retrain the lymphocytes so they no longer attack insulin producing beta cells. Finally, the treated blood is returned back to the patient.

IMAGE OF THE STEM CELL EDUCATOR 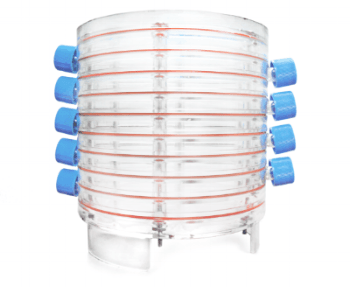 Zhao’s believes that once the T1D autoimmune attack is stopped, dormant beta cells will be able to regenerate and produce insulin. "This first part of the treatment attacks the autoimmunity,” says Zhao, “the second issue is the shortage of beta cells. We have found that after we control the autoimmunity, resting beta cells can proliferate and we have seen beta cell regeneration in clinical trials."

One key benefit of this process is that it uses the person's own blood supply which minimizes the introduction of any foreign substance into the body. The procedure takes place in the hospital and takes two to three hours. It is minimally invasive and uses an IV for the initial blood draw and again to return the treated blood back to the patient. Patients receive one treatment and are followed for 4, 12, 24 and 40 weeks after therapy. Depending on the effectiveness of the initial treatment patients may receive a second treatment after the initial 40 weeks of observation.

In 2015, Zhao completed a 15 person human trial conducted conducted overseas and, as of the publishing date, is recruiting people for a Phase I trial to be conducted in the United States.

The human trial that was completed in 2015 included 15 adults with established T1D and was conduced in both Spain and China.  According to the published results, the trial demonstrated that the STE procedure was safe for patients but showed a statistically insignificant increase in C-peptide and a minimal reduction in A1c.

The trial underway in the United States is Phase I with a goal of demonstrating safety and will include 10 people with established T1D.  The trial has begun testing participants but is still actively recruiting.  Estimated completion date is January 2018. 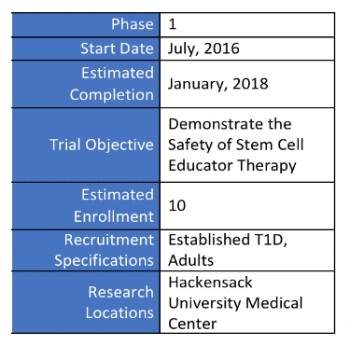