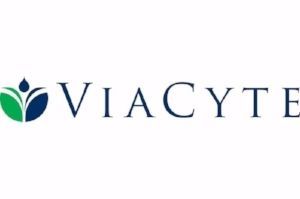 This is the fourth in a series of reports detailing individual research projects currently in human trials with the potential to deliver a Practical Cure. The twelve Practical Cure projects that will be profiled were identified and summarized in the 2016 State of the Cure for Type 1 Diabetes, which was published during the first week of January 2017.

This report focuses on ViaCyte’s islet cell replacement therapies and features an interview with ViaCyte president and CEO Paul Laikind. ViaCyte Inc. is a for-profit company located in California.

ViaCyte has developed their own line of cells, derived from embryonic stem cells, that once implanted are expected to develop into insulin-producing islets. The stem cells used to manufacture the product are capable of self-renewing according to ViaCyte. The hypothesis is that the cell's ability to regenerate will resolve the issue of cell supply and replace the need for insulin completely.

As mentioned above, ViaCyte is pursuing two different approaches to address cell protection. The PEC-Encap approach utilizes an encapsulation device called the Encaptra Drug Delivery System which houses the cells in a device the size of a credit card, and is implanted just under the skin. The encapsulation device has two main components: first, it protects the cells from both allogenic rejection and the T1D autoimmune attack using a protective membrane. Without the device, the cells could be targeted and rejected by both by the T1D autoimmune attack and the response to the allogeneic cells. Second, because these cells need oxygen to survive, the device is designed to support blood vessel formation along the device surface thus supplying the cells with oxygen and nutrients and allowing the delivery of insulin and other regulatory hormones from the cells to the rest of the body.

The company is also testing another product candidate, called PEC-Direct, which delivers the same cells as with PEC-Encap but allows for blood vessels to directly interact with the cells.  Treatment with PEC-Direct will necessitate the use of traditional immune suppression drugs to protect the cells from the allogenic and autoimmune attack.  This approach has been identified by ViaCyte as particularly applicable for high-risk T1D patients with severe hypoglycemic episodes, glycemic lability, and impaired awareness of hypoglycemia (IAH). It is not considered a Practical Cure.

“We are dedicated to developing a better way to treat insulin-requiring diabetes, and we are extremely grateful for everyone’s support,” Laikind says. “The work we have done in the clinic with PEC-Encap has been important and encouraging. It has also provided important insight for the development of PEC-Direct as a functional cure for the T1D patients that are the most in need of a new approach to treatment.”

ViaCyte began testing its encapsulation device, PEC-Encap, in 2014 in adults with established T1D in a phase I/II trial at centers in the U.S. and Canada. The trial is designed with two cohorts of patients and has the potential of enrolling up to 56 patients. The first cohort, with approximately 20 patients, is being used to evaluate the safety, tolerability, and viability of the implants. Further device development is underway and enrollment in the trial has been paused pending completion of the device development activity.

Patients in the PEC-Encap trial are individuals with established T1D (at least 3 years since diagnosis with no detectable beta cell function). The trial will follow patients for up to two years. ViaCyte is planning to initiate a clinical trial for the PEC-Direct in the first half of 2017.

“We are grateful for the ongoing support of the T1D community as we work tirelessly to do that which has not been achieved previously – develop a 'functional cure' for type 1 diabetes accessible to all patients with T1D," Laikind says. "We believe that the successful development of our islet cell replacement therapies will free patients with insulin-requiring diabetes from frequent insulin injections, strict diet regimens, constant blood sugar monitoring, and serious acute and chronic health conditions associated with the disease." 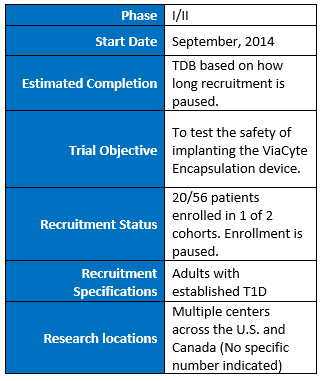