This is the second in a series of reports detailing individual research projects currently in human trials with the potential to deliver a Practical Cure. The twelve Practical Cure projects that will be profiled were identified and summarized in the 2016 State of the Cure for Type 1 Diabetes, which was published during the first week of January 2017.

This report focuses on the BCG Human Clinical Trial Program at Massachusetts General Hospital and features an interview with the lead researcher Dr. Denise Faustman. The program is testing BCG (bacillus calmette-guérin), a drug currently used as a vaccine for tuberculosis, as a possible cure or permanent reversal for established type 1 diabetes. BCG is unique in that it is an inexpensive generic drug which, if approved, would be a cost-effective treatment for type 1. The trial is funded entirely by private philanthropic donations and is not supported by any for-profit research efforts or JDRF.

Faustman’s hypothesis is that the administration of BCG can stop the autoimmune attack in T1D and enable the restoration of near normal HbA1c values in part from beta cell regeneration. The rationale for why this works, according to Faustman, is based on an understanding of "TNF", a cell signaling protein whose presence tells the body’s immune system to stop attacking insulin-producing beta cells.

In theory, administration of BCG should result in higher levels of TNF and, therefore, rebalance the immune system, stopping the auto-immune attack. “BCG is the drug that led to the discovery of TNF in 1985,” Faustman says, “it was well known that when you get vaccinated with BCG, your TNF levels went up. That was the fundamental link that drove us, alongside the ability to get into the clinic and introduce something inexpensive.”

A phase II human trial is currently recruiting. It will attempt to demonstrate the effectiveness of BCG and will follow patients for five years.  Faustman underscores that these trials will focus on people with established T1D: “We are treating people who have the disease,” Faustman says, “They are five, ten, twenty years out and we are trying to reverse it. It’s a huge distinguishing point of what we do.” 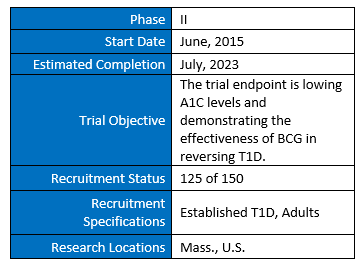 To learn more or make a donation: www.faustmanlab.org, email diabetestrial@partners.org, or call 617-726-4084.

To be considered for enrollment please email: diabetestrial@partners.org