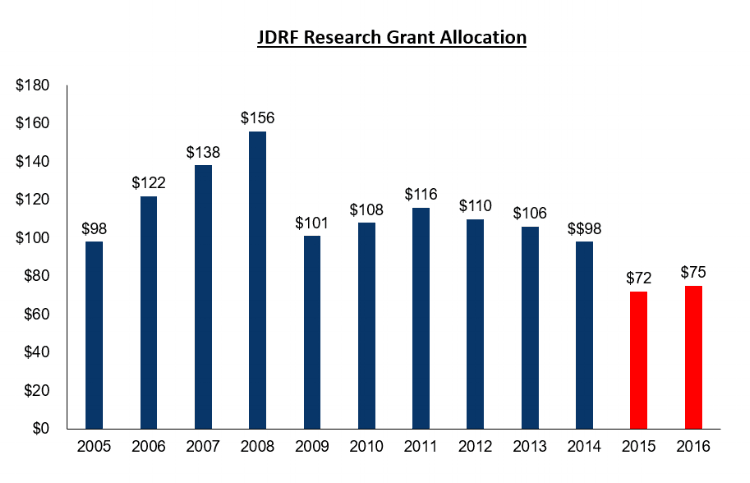 This report provides a quick overview of JDRF's 2016 research grant spending and is the first in a series of reports that will review different aspects of JDRF financial statements. These reports, based on publicly available tax and financial documents located on the JDRF website, show how JDRF generates its revenue and how it utilizes those funds. Financials are audited and approved for release by the accounting firm KPMG LLC.

There are two key highlights related to research grant spending:

The main news is that research grant allocation has remained at significantly lower levels for two consecutive years, as compared to the previous 10 years (2006-2014) when the JDCA began tracking JDRF financials. The JDCA would like to acknowledge that JDRF increased their grant allocation from $72 million in 2015 to $75 million in 2016. Although this is a positive step forward, as any increase is a step in the right direction, the amount of increase is largely immaterial, as it still represents a $23 million decline from 2014, and $81 million less than the 2008 peak year.

2) RESEARCH GRANTS AS A PERCENT OF REVENUE

Our principle concern with the historic and sustained decrease in research grant funding is that the continued lack of alignment with donor priorities, if not corrected quickly, will accelerate a decline in donations.

The small upward movement in research grant spending is largely immaterial and does not change our concern that relatively few JDRF resources are being deployed to directly fund research. During the past five years, the amount of JDRF funds allocated to research has decreased from over half of the annual income to a third. This decrease in research spending is indicative of either an intentional shift to a new strategy or a unintentional drift away from the long-standing focus on funding research grants.
Either way, the JDCA believes this change should be clearly explained to donors. 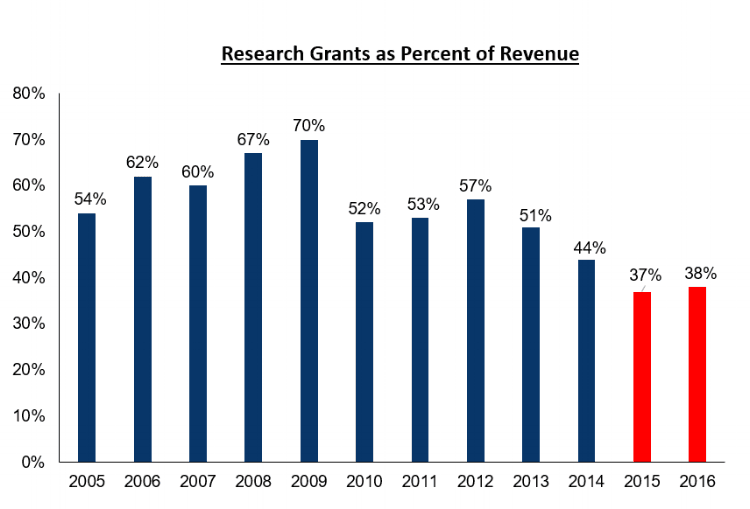 The source for this data is can be found at the following: