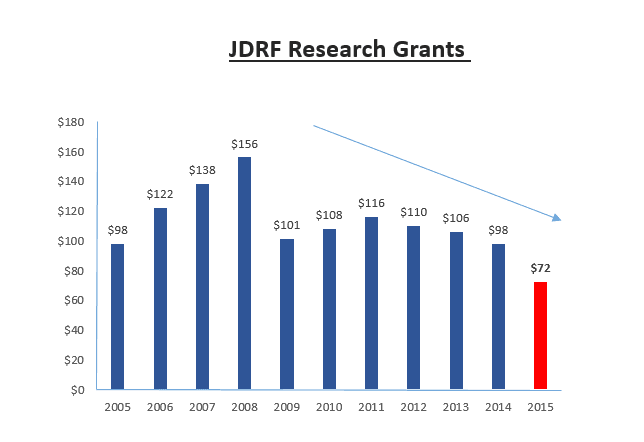 Earlier this week the JDRF released their 2015 financial statements.  This public document shows how the JDRF generates revenue and how it utilizes those funds.  It is audited and approved for release by the accounting firm KPMG.

There are two main highlights related to research grants, which donors indicate is the main reason they give.

The big news from a quick review of this document is that research grant allocation dropped to the lowest level in 11 years, as shown in the chart above.  This is a $26 Million decline from 2014 and $84 Million less than the 2008 peak year.

Research grants as a percentage of revenue, which is an indicator of the priority level of research grants versus other spending, also declined to its lowest level within the past 11 years.  In 2015, only 37% of JDRF revenue was used for research grant allocation, down from 44% in 2014 and 64% during the 2008 peak year (see Data Chart B at the end of this report).   Research allocation was the only category that decreased as a percent of revenue -- all other areas of spending increased.

According to JDRF executives, the decrease in research grants follows from a decision to stop funding a few large research projects (details not provided) and a strategic decision to stop using investment reserves to fund research.

Our principle concern with historic decrease in research grant funding is that the continued lack of alignment with donor priorities, if not corrected quickly, will accelerate a decline in donations.

In the weeks ahead we will published a deeper review of JDRF revenue and expense utilization.  The source for this data is at the following link:   http://cdn.jdrf.org/wp-content/uploads/2016/02/F_383155_15_JDRFInternational_FS.pdf 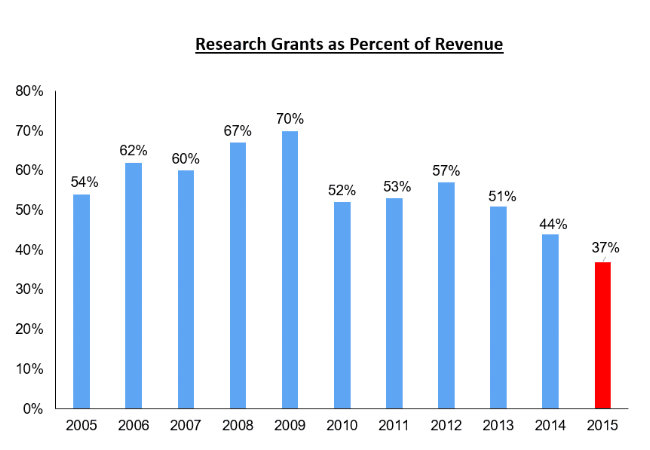