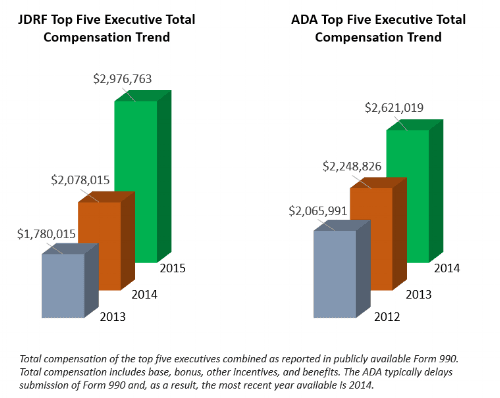 This is the fifth annual review of executive compensation for the top diabetes non-profits. The review will focus on the ADA and JDRF, the largest diabetes fundraising organizations, but also includes data in the appendix for Joslin and the DRI, two other notable diabetes organizations we periodically cover. All data is sourced from the publicly available Form 990, an annual submission mandated by the U.S. federal requirement for all nonprofit organizations.

The pay level of these executives places them in the top 1% of all earners in the United States. We have no inherent issue with competitive compensation, but we also strongly believe that in return for this pay level these individuals should be held to a very high standard of accountability and performance as measured by objective results toward finding a cure. The JDCA would like to see material progress toward a practical cure actively built into the compensation structure and a level of transparency in disclosure of compensation practices similar to the type of information for-profit entities must submit in proxy statements.

Furthermore, the increase in compensation of the past several years does not appear to be a result of a performance breakthrough such as a research result that yielded a clear path to a cure. The JDCA reached out to both organizations and asked them to provide rationale for the pay increase. The ADA declined to respond, while the JDRF provided an official reply that indicated management transition payments, such as severance and sign-on bonuses, as the primary driver. (Three executives left the organization and one joined during fiscal 2015). See Appendix B for the full official reply from the JDRF. 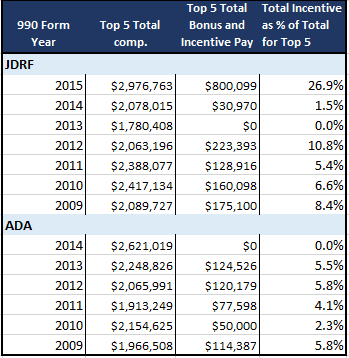 "JDRF has adopted a compensation policy for its executives that has been vetted by nonprofit compensation consultants and approved by a committee of independent board of directors. This policy reflects best practice for the sector and is consistent with other non-profit charities of similar size. The FY15 figures appear higher than normal due to non-recurring events caused by management transitions." 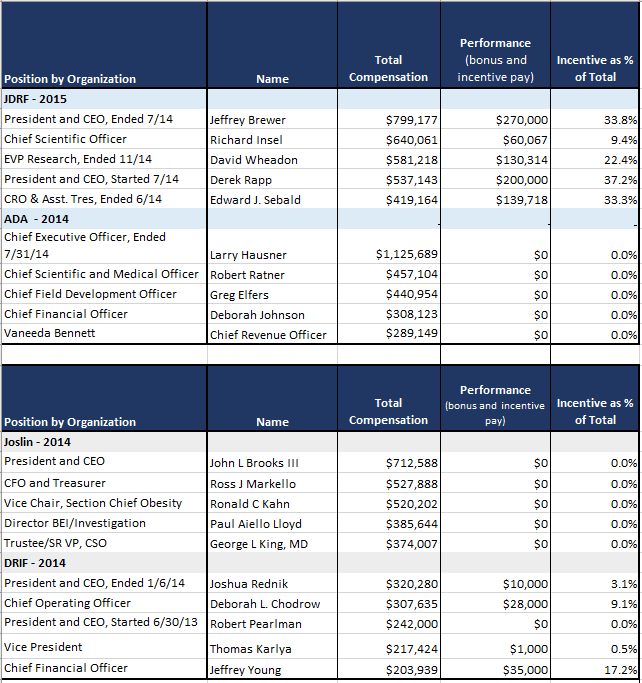