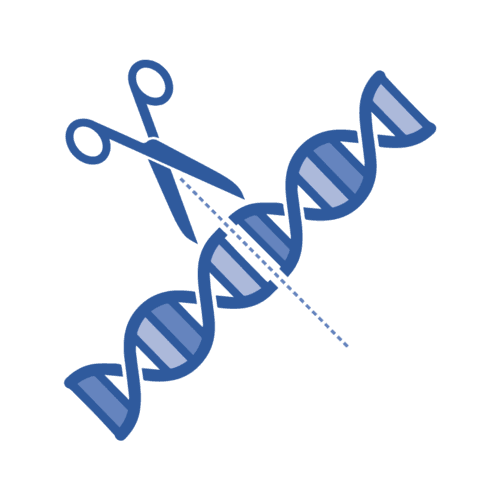 New capabilities in gene editing make it relatively easy for scientists to directly edit DNA, the most fundamental building block of life. Although our understanding of what gene editing can do is still in its infancy, current technology offers hope and potential to cure many diseases once thought incurable, including T1D.

One discovery in particular has jump-started the advance of gene editing. CRISPR technology was invented in 2012, and quickly became the primary tool for editing genes. The scientists who discovered it were awarded the 2020 Nobel Prize in Chemistry.

Gene editing is just beginning to make an impact on medical research. There are only a handful of human trials, and before it can be used to cure diseases, it must demonstrate safety in people. Despite this, the hype surrounding gene editing and CRISPR is enormous.

Gene editing is different from gene therapy and cell therapy because it impacts the very blueprint of our cells, the DNA. While cell therapy refers to the transfer of cells into a patient to affect diseases, and gene therapy involves the introduction, removal or replacement of entire strands of DNA or RNA, gene editing gives scientists the ability to make changes within the genes themselves.

In 2012, Emmanuelle Charpentier and Jennifer Doudna published a paper in the journal Science that demonstrated how bacteria fight viruses using a CRISPR/Cas9 system. Furthermore, they explained how this natural phenomenon could be harnessed by people to create a technology that can edit the genes of just about anything.

The technology links CRISPR RNA (crRNA) with a protein (Cas9). crRNA guides the Cas9 along the DNA strand until it finds the section that the scientists want to target. The job of Cas9 is to cut the DNA. Once the DNA is cut, the CRISPR process can replace it with a new strand.

However, T1D researchers are adopting this technology and have started a range of preclinical (meaning not yet in human testing) medical research. The two general approaches are:

There is one Practical Cure project utilizing gene-editing technology. In 2018, ViaCyte announced a partnership with CRISPR Therapeutics, the company founded by Dr. Charpentier, to make stem cell derived beta-cells that are invisible to the immune system. In theory, this could eliminate the need to protect transplanted cells using methods such as immunosuppression or encapsulation. ViaCyte hopes to have this project in human trials by the end of 2021. If this timeline holds, it would be the first human trial testing CRISPR in people with T1D.

If a gene editing T1D Practical Cure project were to start tomorrow, it would take at least ten years to get it to market. Even this outlook is optimistic. Because the technology is so new, we should expect that the process of human testing will not be straightforward. Experimentation, unexpected successes and failures, and a few genuine wins would all be par for the course in an emerging medical capability that has yet to undergo the scrutiny of human testing.

For all of us in the T1D community who want a Practical Cure, the excitement about gene editing should be tempered by the fact that this research is in such early stages. However, gene editing projects are worthy of our attention. Already, T1D researchers are using it to come up with new solutions to the problems that have hindered Practical Cure research for years.