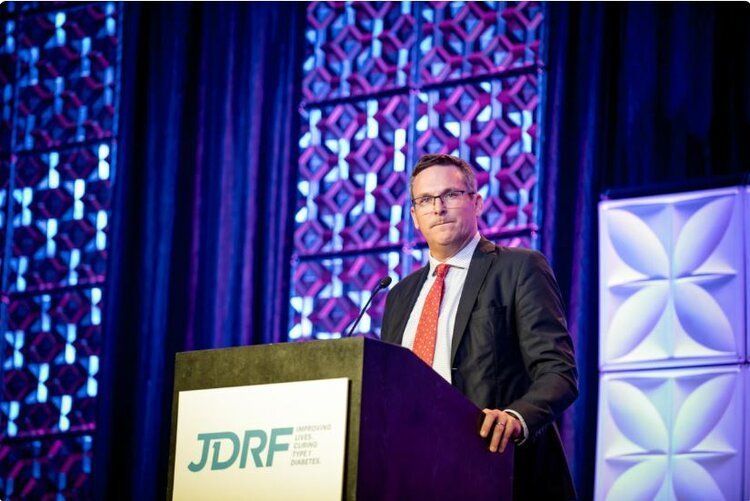 Picture: JDRF CEO Aaron Kowalski at the 2019 JDRF One Conference.

The speech covered a broad range of topics, addressing the burdens of living with T1D, technological advances in T1D, and government and healthcare advocacy around T1D issues. Dr. Kowalski dedicated roughly 1/3 of his time to talk about cures for type 1 diabetes. He stated bluntly: “we need to fund more research.” We agree, and we hope Dr. Kowalski will take action to restore JDRF’s annual research grant expenditure from its ten-year low.

During the address, Dr. Kowalski identified two T1D Cure research pathways on which the JDRF is now focusing: 1) beta cell therapies and 2) immunotherapies. In introducing these topics, he made the exciting claims that “we are closer than ever to beating this disease” and that “we can now make the cells— enough cells to potentially cure everyone of T1D.” However, nothing in this presentation provided evidence that a cure is imminent.

Dr. Kowalski’s address, which can be found here, is discussed in greater detail below.

Two of the cure pathways noted in the speech are the same ones that will drive a Practical Cure. Over the past decade, we have written about these pathways, often in the shorthand of cell supply and cell protection. We applaud the JDRF narrowing its focus, but we have not yet seen a clear definition of success, a roadmap, or commitment of resources towards a Practical Cure objective.

Dr. Kowalski referenced during the speech the impact of his paper on the artificial pancreas that pointed the way and provided direction for JDRF’s work in that field. It was a clear roadmap that defined the end game, pointed out challenges, and served as a guide for resource allocation. It is time for the same approach toward a Practical Cure.

If JDRF was to define a Practical Cure pathway and increase dedicated funding for projects— like beta cell or immune system modification therapies— that could deliver a Practical Cure for those people living with established T1D, Dr. Kowalski could bring us even closer to “beating this disease” during his tenure as JDRF President and CEO.