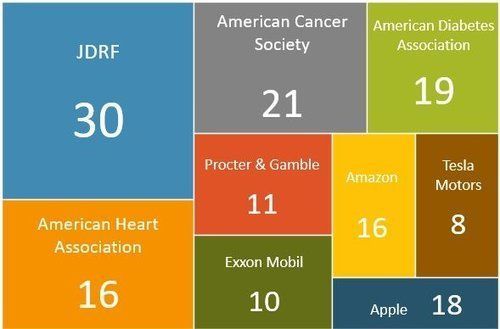 Appendix A: A Relative Comparison of the Size of the Board of Directors at Non-Profit and For-Profit Organizations in 2019

As the highest governing body, the Board of Directors at the major T1D non-profits are responsible for establishing the organization mission and values, setting the strategic direction, overseeing executive leadership, and allocating resources.

Currently, the ADA and JDRF board operations are not publicly disclosed and there is no mechanism for donor input. Board members at the ADA and JDRF have a fiduciary duty to fulfill the priorities of donors and shoulder the responsibility for keeping the organization on track. This is the group of people who are ultimately responsible for the decline in research grant spending levels.

JDRF INTERNATIONAL BOARD OF DIRECTORS FOR FISCAL YEAR 2019

THE ADA INTERNATIONAL BOARD OF DIRECTORS FOR FISCAL YEAR 2019