T1D Board of Directors: It’s Time for Action 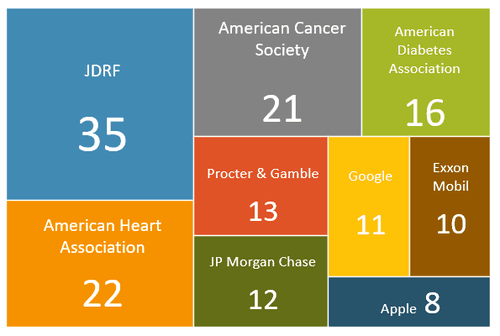 The Board of Directors has more influence on the performance and direction of an organization than anybody else. This is especially true for T1D non-profits, where the board is responsible for establishing the organization mission and values, setting the strategic direction, allocating funds, and most importantly exercising accountability to donors.

The board members at the ADA and JDRF have a fiduciary duty to fulfill the priorities of donors and shoulder the ultimate responsibility for keeping the organization on track. This is the group of people who are ultimately responsible for current research grant spending levels.

Little has changed in the five years the JDCA has been tracking the Board of Directors at the ADA and JDRF.  Performance accountability of board members remains unclear for both organizations and public access to these individuals is extremely limited.

The ADA board is currently comprised of 16 individuals. Although still larger than many for-profit companies, the ADA's board is relatively in-line with non-profit board size norms. Additionally, every person on the board has a post-graduate degree and many hold medical degrees.

In comparison, JDRF's board is disproportionately large at 35 members. The board is composed mainly of wealthy individual donors who are selected from an internal population as opposed to a broad base of donors. It is also important to note that JDRF has never made a public comment addressing the size of the board, or how board members are chosen.

JDRF INTERNATIONAL BOARD OF DIRECTORS FOR FISCAL YEAR 2019

THE ADA INTERNATIONAL BOARD OF DIRECTORS FOR FISCAL YEAR 2018