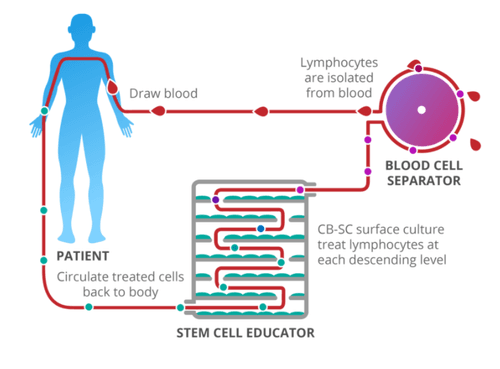 Research participants undergo a three-part treatment as illustrated in the picture above. First, blood is drawn from the patient and the white blood cells are isolated and separated out. Then, over several hours, the cells are passed through the Stem Cell Educator, a medical instrument consisting of multiple levels of Petri-dishes containing umbilical-cord stem cells. Zhao's theory is that the stem cells can retrain the lymphocytes so they no longer attack insulin-producing beta cells. Finally, the treated blood is returned to the patient. Zhao believes that once the T1D autoimmune attack is stopped, remaining beta cells will be able to regenerate and produce insulin.

One key benefit of this process is that it uses the person's own blood supply which minimizes the introduction of any foreign substance into the body. The procedure takes place in the hospital and takes two to three hours. It is minimally invasive and uses an IV for the initial blood draw and again to return the treated blood back to the patient.

As noted above, Zhao recently released follow-up data which tracked patients from a phase I 15-person trial in China for four years after one SCE treatment. Zhao noted three main takeaways from the follow-up data:

The newly started phase II trial in China, mentioned above, will test two SCE treatments given two months apart to roughly 50 patients with T1D. Zhao plans to report intermediate data from this trial sometime before the end of 2018. He also plans to start a phase-II trial in the United States later in 2018.