JDRF Direct and Influenced Grant Spending (As Published by JDRF) 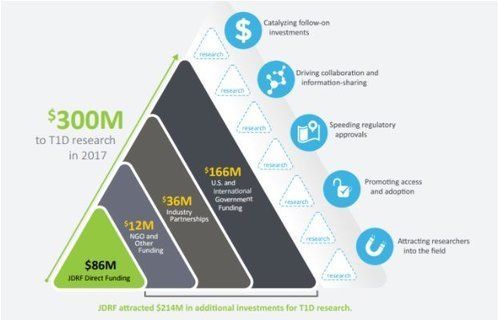 Last week, the JDCA published a report on JDRF’s 2017 audited financial statements which showed that JDRF spent $79 million on research grants, 38 percent of their annual income. This number is down from 44 percent in 2014 and 67 percent from the 2008 peak year. This decline appears to be the result of a strategic shift away from prioritizing research, even though the majority of donors want their gifts to be used to fund T1D research (See Appendix A).

At the same time, JDRF asserts in the 2017 Annual Report that they were pivotal to delivering $300 million in total investments for T1D research during 2017. (See JDRF-derived infographic above) (Click here to view the full 2017 JDRF Annual Report).

The assertion that JDRF was responsible for $300 million dollars of research spending in 2017, rather than the $79 million reported in their audited financial statements, seems to be a direct response to public pressure to increase research spending. Claiming $300 million in T1D research funding shifts the communication away from the decline in direct funding, which to date, has never been publicly addressed or explained to donors.

The remainder of this report will address this discrepancy.

On page 13 of the annual report JDRF quotes: “In the fiscal year 2017, JDRF attracted more than $214 million in funding from partners, bringing a total of $300 million to T1D research.” The JDRF chart above illustrates that statement. The question is how much credit does JDRF deserve, and is their claim that they are responsible for $214 million in additional investments for T1D research accurate or misleading? Excluding the $86m in JDRF Direct Funding, which can be tied to specific grants and investment returns listed in their 990-tax form, JDRF does not provide any transparency to the remaining $214m.

JDRF Direct Funding: $86 Million
This part of the chart shows the amount of research that JDRF directly funds.

NGO and Other Funding: $12 Million
Very few details are provided about these activities and their impact, and there is no evidence that JDRF is an essential part of these initiatives.

At least one example shared in the annual report would suggest that these initiatives directly benefited from JDRFs involvement. In 2017, JDRF partnered with IBM to utilize “the power of machine learning to unlock the science around T1D progression.”

As mentioned above, there is little-to-no visibility to any portion of the $214m in claimed additional investments for T1D. The JDCA believes JDRF has a moral and fiduciary duty to donors to clearly identify where all figures, infographics, and financial statements are sourced so donors can make accurate and informed decisions— and when needed, raise concerns.