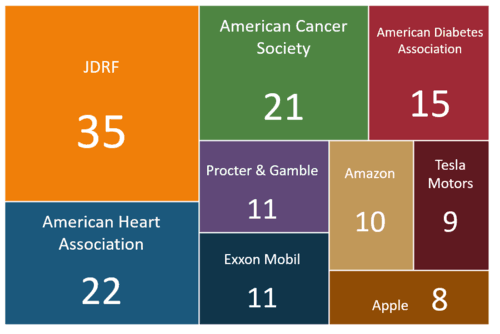 The Board of Directors has more influence on the performance and direction of an organization than anyone else. This is especially true for T1D non-profits where the board is responsible for establishing the organization mission and values, setting the strategic direction, allocating funds, and most importantly exercising accountability to donors.

As the two largest T1D fundraising organizations, the ADA and JDRF control most of the financial resources for T1D research, almost all of which is raised from outside donations. Unfortunately, over the past decade, the JDRF Board has strayed from its main goal of finding a cure for T1D and has overseen a dramatic decline in cure research spending from 64% of annual income during the 2008 peak spending year to 28% in 2016. In addition, only 3% of ADA annual income was spent on research specifically for T1D in 2016.

The Board of Directors is the group of people who are ultimately responsible for the operation of the organization and for research grant spending descending to historic lows. All executives report to the board. As such, the board is uniquely capable of restoring direct research support to historic norms.

A 2016 JDCA survey of the T1D community found that 96% of all respondents believe that cure research should be the number one priority for the major diabetes organizations. Consequently, it is our belief that the board members at the ADA and JDRF have a fiduciary duty to fulfill the priorities of donors and keep the mission in-line with donor priorities.

Clear and transparent executive performance metrics against cure progress must be put in place to enable the board to hold executives accountable for genuine performance toward the ultimate goal of finding a cure for T1D.

Hold Board Members Externally Accountable to Donors
Non-profit board members can only be appointed or removed by fellow board members, which consolidates power in an insulated bubble. Board member election by a broad base of donors would ensure donor priorities are represented and guarantee alignment with the donor base.

Consider a 'Say on Pay' Executive Compensation Structure
A 'say on pay' model or initiative would allow donors to vote on specific aspects of executive compensation such as pay structure, base pay, and bonus amounts. As stated in our last report (click here to view), the JDCA believes a 'say on pay' model could deliver T1D non-profit donors many of the same benefits it provides for-profit company shareholders, such as increased transparency and executive accountability.

Decrease the Number of Members on the Non-Profit Boards
As shown in the opening chart, JDRF has 35 board members and the ADA has 15. In contrast, effective boards in many high-performing organizations have between 8-14 members—large enough to bring a range of skills and experience to the table but small enough to maintain a meaningful and fully engaged discussion.

Report in a Timely and Comprehensive Manner
The major T1D non-profits only communicate performance in annual reports that come out months after the year-end. More regular, comprehensive reporting on progress would allow donors to stay up to date on progress and make informed giving decisions. Additionally, better communication practices would deepen trust with donors, which would ultimately boost donations to the non-profits.