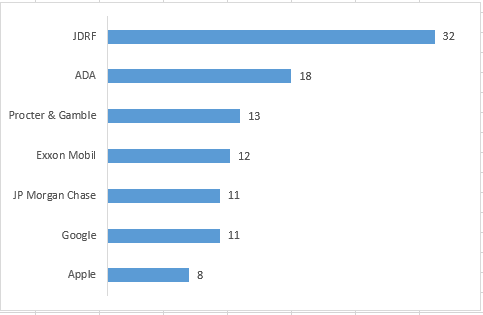 COMPARISON OF THE NUMBER OF BOARD MEMBERS AT EACH ORGANIZATION.

The board of directors at JDRF and the ADA ultimately have more influence over spending and strategy than anyone else at the organization. Board members set the organization’s strategic direction and have the final say in funding allocations. As such, they have the significant ability to set priorities and accelerate cure progress.

In our third annual report regarding the role of the boards of directors, little has changed.  Boards are still surprisingly large; still composed mainly of wealthy individual donors; and still selected from an internal population rather than elected by a broad base of donors.  Compared to a for-profit corporation, where each member of the board is deeply involved in insuring that the organization fulfills and delivers its mission, the non-profit boards seem more ceremonial than operational.

The following is a list of several recommendations for addressing a few systemic problems and building a high impact board: