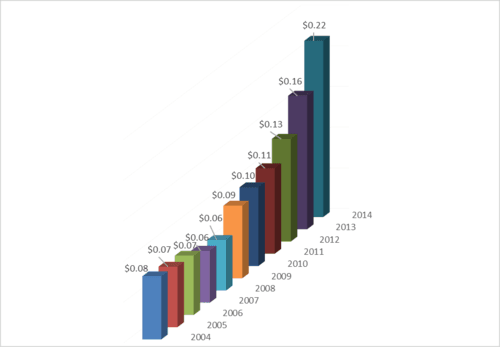 JDRF is becoming less efficient at administering research grants. In 2014, it cost JDRF 22 cents to administer each grant dollar of research, the highest level of any year in the past decade. From 2004 to 2008, the administrative cost of each grant dollar ranged from $0.06 to $0.08; from 2009 onward the cost increased steadily to eventually peak at $0.22 in 2014 (Appendix B). The trend is alarming and not sustainable.

The Rise in Research Support Costs

The 367% increase in administration costs represents a year-over-year trend that has been accelerating over the past 5 years. In 2014 alone, over $10 Million more could have been spent on actual research grants rather than research administration costs, if research support had been maintained at the 4-5% level that was consistent from 2004 to 2010. (Appendix A)

Should this trend go unchecked it will continue to reduce funding for actual research grants.

In order to remain effective, all high-performing enterprises must keep a sharp eye on efficiency measures. JDRF’S board and CEO now face a metric that indicates a significant drop in grant-making efficiency. At minimum, JDRF leadership has an obligation to explain to donors the root cause of rising research support costs and the actions being taken to restore efficient performance.