Smart Insulin: An Overview of All Projects

Smart insulin is chemically activated in response to changes in blood glucose levels. It remains inactive inside the body until blood glucose rises above normal levels. At that point, the chemical component activates the insulin response. Once blood glucose returns to normal, the insulin action ceases, avoiding low blood sugar. In theory, smart insulin could potentially decrease the amount of regular blood-glucose tests required and dramatically reduce the number of daily injections to one per day.

As noted above, there are four main types of smart insulin in development:

The development of smart insulin first started in the late 70s, but early prototypes failed due to the body’s immune response. Throughout the 80s and 90s, scientists continued to develop smart insulin models with a focus on device material and capabilities, without any major breakthroughs. However, in 2010, Merck, one of the largest pharmaceutical companies in the world, acquired a small startup called SmartCells which had developed a smart insulin pill. In 2014, Merck began the first smart insulin phase-I human trial— a major step forward. Unfortunately, in 2016 the Merck trial was terminated for lack of efficacy.

Despite Merck's setback, over the last few years, a number of notable companies, universities, and major T1D non-profits (including JDRF) have begun to invest in smart insulin projects. To date, there is no timeline for when these other smart insulin products will begin testing in humans.

While smart insulin has seen advances over the past few decades, two main issues continue to present development obstacles, as noted above: (1) The glucose-sensing ability and insulin response. In order to be safe, smart insulin needs to release the correct amount of insulin in response to changes in glucose in the body. Solving this issue necessitates a bio-material which can hold and contain insulin for long stretches of time, respond to glucose changes, release precise doses when needed, and shut off when blood sugar levels are normalized. (2) Protection from the body’s immune response. Early models of smart insulin failed because they were attacked as a foreign object once inside the body. In order to be successful, any smart insulin product would need to remain in the body without being attacked.

The Smart Insulin Path to a Practical Cure:

To qualify as a Practical Cure, smart insulin would have to last long enough to eliminate the need for multiple daily injections. Although no current smart insulin product has been able to achieve this, the projects in this analysis are only the first wave of products being tested.As technology and medical advancements are often rapidly iterative, the JDCA remains hopeful that a smart insulin project will make its way through the testing pipeline and into human trials in the near future. 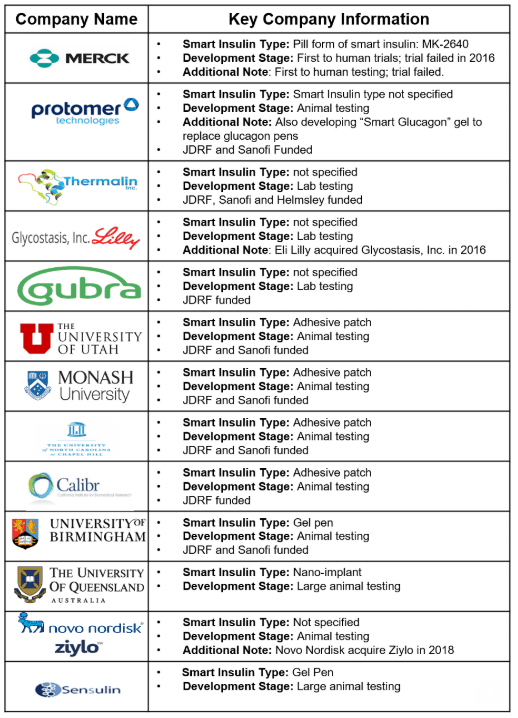