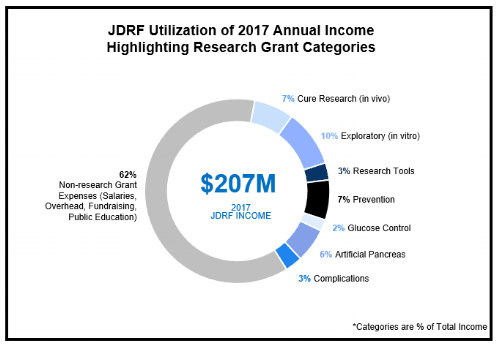 This is the sixth annual review of JDRF research grant allocations. The main purpose of reviewing and sharing this data is to assess how JDRF is addressing the number one priority of donors: finding a cure for T1D.

In preparing this report, the JDCA reviewed every grant funded by JDRF during 2017, 494 projects in total (see Appendix C). The 494 research project abstracts are individually categorized by research type and development level. Source data, including research abstracts and financial information, is available to the public on the JDRF website.

The biggest takeaways for the JDCA audience are JDRF only funded two Practical Cure projects in 2017, Viacyte and Beta-02, and only 7 percent of the total JDRF budget was attributed to Cure Research (in vivo). Between 2016 and 2017, research grant spending remained relatively flat across all categories, with no research category increasing or decreasing by more than 3 percent in total research spending from 2016 to 2017.

However, growth trends from 2014 to 2017 (Appendix A) tell a different story which is underscored by a 21 percent decline in total research spending. By category, Cure Research (in vivo) spending declined by 48 percent, while Prevention and Basic/Exploratory research both increased by 64 and 87 percent, respectively. All other categories declined between 17 and 56 percent.

As noted in last's year report, Prevention efforts have received an increased focus over thepast several years, highlighting a shift in strategy away from Cure research. The increase in Prevention research is concerning for people living with established T1D, as it shifts emphasis away from Cure and Practical Cure research, which dropped from $27 million in 2014 to only $14 million in 2017.

Appendix B: JDRF Grant as Percent of Total Income by Category 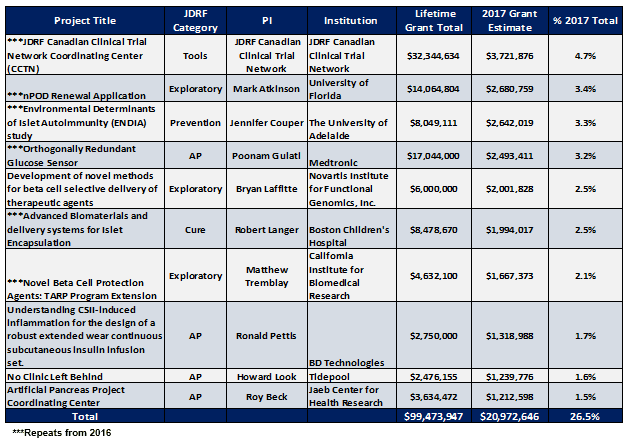