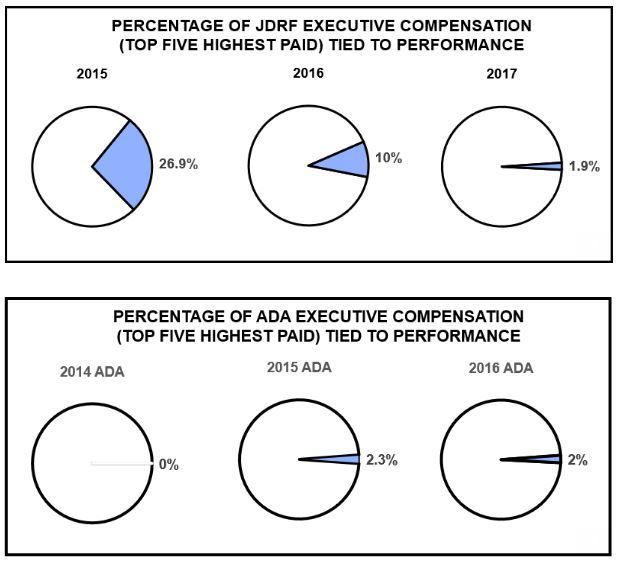 This is the seventh annual review of executive compensation for the top diabetes non-profits. The review focuses on the ADA and JDRF, the largest diabetes fundraising organizations, but also includes data for Joslin and the Diabetes Research Institute Foundation (DRIF), two other notable diabetes funding organizations we periodically cover. A full overview of compensation for the top five executives at each organization is detailed in Appendix A. All data is sourced from the publicly available IRS Form 990.

Executive Pay Compensation is not Tied to Results

The most important finding of this report is that very little executive compensation is tied directly to performance. Executives are paid the majority of their compensation, regardless of whether they meet their main objectives or make progress toward a cure for T1D. This differs from most for-profit companies, where the majority of executive pay is directly tied to performance. By leaving incentive pay off the table, the JDCA believes the ADA and JDRF are missing out on an effective way to prioritize the central goal of each organization's mission— finding a cure for T1D.

As stated above, the high compensation level for diabetes non-profit executives places them in the top 1 percent of all earners in the U.S. CEOs of larger organizations, as measured by the amount of money the organization raises per year, are generally paid more. As an example, the current JDRF CEO, Derek Rapp, is paid more than four times as much per dollar of annual revenue as the CEO of the American Cancer Society, one of the largest non-profits in the world. See Appendix B.

Competitive executive compensation is important because it helps to attract and retain top talent. However, the JDCA believes it is also important to hold these highly-compensated executives to a level of accountability and performance commensurate with their salary. As long as compensation remains untied to performance, executives will remain unaligned with donors who want resources allocated to finding a cure over all else.

Say on Pay: An Opportunity for Nonprofits?

Executive compensation levels at the largest diabetes non-profits are determined behind closed doors by a committee within the board. The Board of Directors does not publicly communicate any aspect of strategy or rationale for compensation levels and the average donor is given no input or transparency into the decision.

The same approach is followed by most for-profit companies but is actively being challenged by shareholders who want input on the remuneration of executives. This is commonly referred to as "say on pay." When a corporation has a say on pay provision, shareholders are allowed to vote on specific aspects of executive compensation, such as pay structure, base pay, and most commonly, bonus amounts.

The JDCA believes a "say on pay" model could deliver T1D non-profit donors many of the same benefits it provides for-profit company shareholders, such as increased transparency and executive accountability. While the mechanics of adopting a 'say on pay' model would take some work to implement, the long-term benefits to both donors and the board may be well worth the effort.

Appendix A: Compensation of the Top Five Executives for JDRF, ADA, Joslin, and DRIF 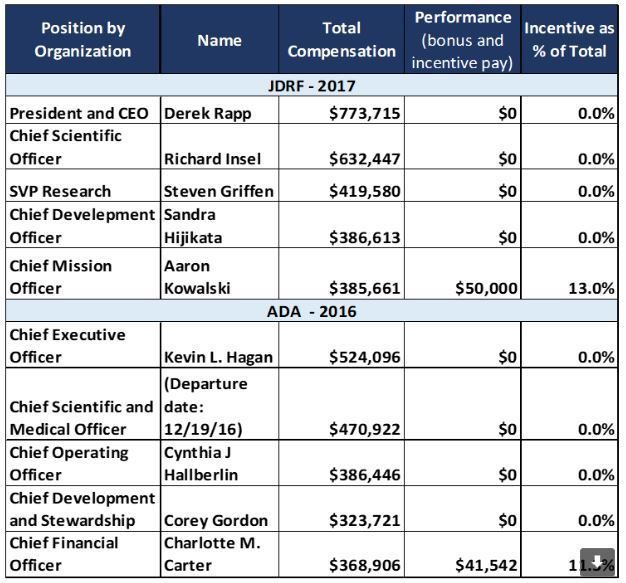 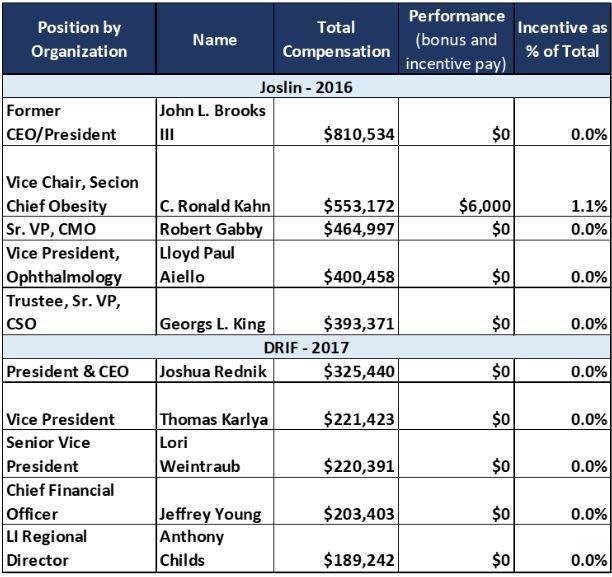 Appendix B: Comparison of Executive Compensation at other Non-Profits 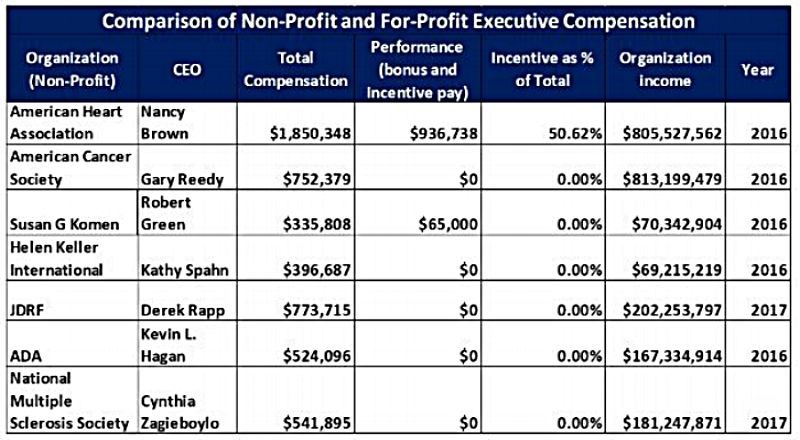